Our ship, Silversea Silver Cloud arrived in Copenhagen about 6pm last night and we enjoyed a long, slow descent into darkness. It was a gorgeous evening, with a photographer’s light: low and orange.

Many of our guests from the previous cruise (Southampton to France, Belgium, the Netherlands, and Sweden) debarked this morning in Copenhagen.

A new group, including many old friends from previous cruises got on board here.

Tonight we sail out of Copenhagen and begin to head north…all the way up the coastline of Norway, along the top of Finland’s Lapland, and then to the attic of Russia with calls at Murmansk, Arkhangelsk, and Solovetsky Island.

For the middle eight or nine days of the trip, we will be in the land of the Midnight Sun: no sunset at all.

I’m excited aboard this itinerary: it is not the usual suspects in Europe.

I’ll be posting blogs from each of the ports of call over the next 17 days.

Aside from Hamlet, not all that much is melancholy in Denmark.

The streets are lively, the shops seem to be doing a good business, and the classic century-old amusement park of Tivoli Gardens in city center was whirling by noon.

One of the most famous symbols of the city is The Little Mermaid, and this is something that existed way, way before Disney became involved.

The Danish author Hans Christian Andersen’s story about Den lille havfrue (the little sea lady), was written in 1836. It became a global hit.

In 1909, Carl Jacobsen, son of the founder of the Carlsberg brewery and namesake to the beer, commissioned a statue of the mermaid.

He had become fascinated by a ballet based on the fairytale and presented at Copenhagen’s Royal Theatre. Jacobsen asked prima ballerina Ellen Price to model for the statue.

The statue’s head was indeed modelled after Price, but the ballerina refused to model in the nude.

And so Sculptor Edvard Eriksen prevailed on his wife, Eline Eriksen, to pose for the body in 1913.

That’s a little kinky: someone else’s head on your wife’s body. Or maybe not.

It made me think of Frédéric Auguste Bartholdi and the Statue of Liberty in New York: that work is said to be the sculptor’s mother’s face atop the body of the sculptor’s mistress. That is definitely kinky.

Anyhow, in 1989 Disney made a movie sort-of-kind-of based on the Hans Christian Andersen fable. I’ll leave it to you to decide if that amounts to desecration or homage.

But the Little Mermaid—and she is littler and more vulnerable than most people imagine—sits on a rock just a few hundred feet away from our ship, docked at Langelinie.

And the other thing: when you go to visit The Little Mermaid, you will almost certainly not be alone.

Photos copyright 2013, Corey Sandler. To obtain a copy please contact me through the “Order a Photo” tab on this blog. 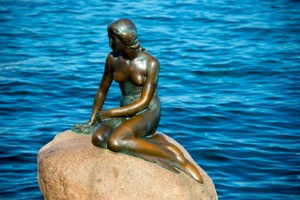 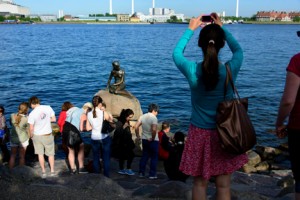 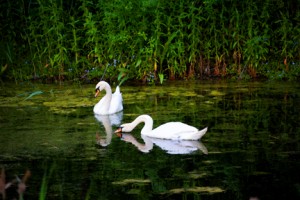 Swans in Churchill Park near our ship 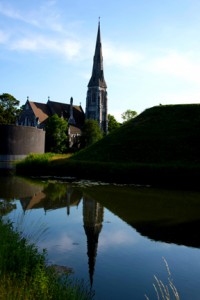 The Anglican Church in Copenhagen, the only one of its kind in Denmark 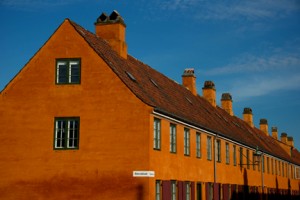 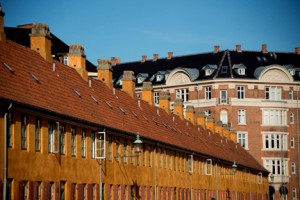 .The setting sun accentuates the colors of old military structures along the harbor