We’re embarked on an extraordinary journey, from Copenhagen in the Baltic Sea through the Kattegat and into the North Sea.

Silversea Silver Cloud is headed up the coast of Norway with stops at some impressive harbors and spectacular fjords, then above Lapland to an historically important but still-relatively hidden corner of ancient, then Czarist, and then Soviet Russia. 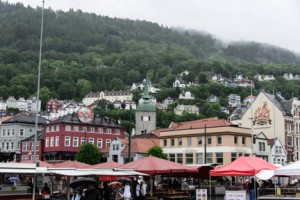 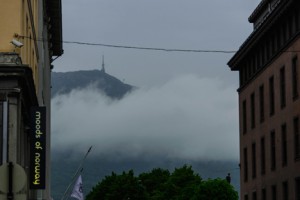 Our first port of call on this latest voyage on Silversea Silver Cloud is Moody Bergen.

Why moody? Well, the people here are almost always unfailingly pleasant and accommodating.

The weather: not so much.

I told our guests in my lecture about Bergen that this is a place where you can experience all of the seasons. All in one day, that is.

Right on schedule, we arrived at our parking spot very close to the heart of town…and it began raining. It changed from a drizzle to steadier rain and then a peek of bright sky before moving toward a hint of winter.

Bryggen, on the north side of the bay, was used as a dock and warehouse area by the Hansa between 1350 and 1750. 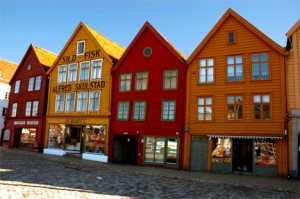 I am a big fan of the Natural History Museum at the University of Bergen.

It is a very old-fashioned museum—think wooden cabinets with specimens pinned in place, stuffed animals of all sort, and huge whale and other skeletons hanging overhead.

Some of the creatures—and the design of the museum—are extinct. 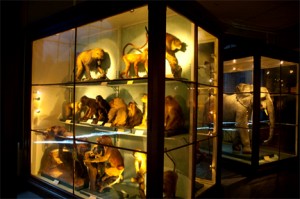 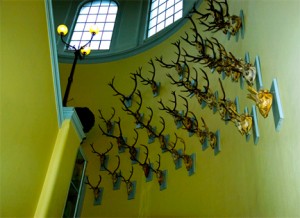 It is thus the second-largest city in Norway, behind only Oslo, although the capital city is much more populous: 1.4 million.

Oh, and a whole bunch of fish. 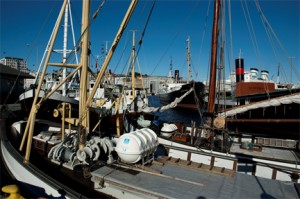 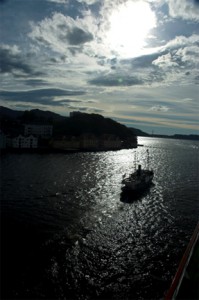 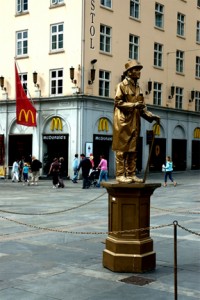 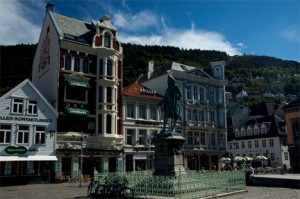 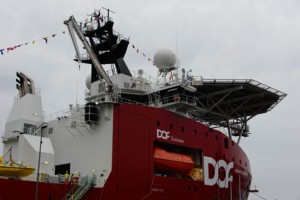 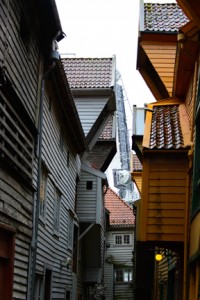 Scenes about town, including back alleys of Bryggen and an extraordinary vessel that is part of the service fleet for the North Sea oil fields

The great fish market occupies the center of the horseshoe-shaped harbor; the market has recently been extended from outdoor stalls to a handsome indoor building.

The fish is about as fresh and tasty as you’ll find anywhere, and all you need to do is look hungry to be offered a sample of smoked salmon or boiled crab or fish chowder. 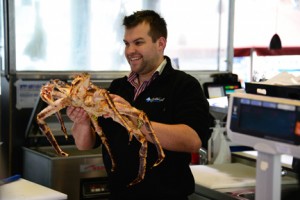 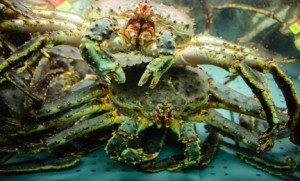 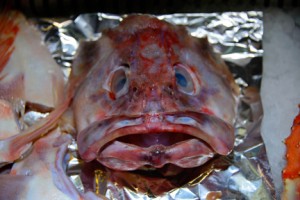 This guy looks quite surprised at the situation he has found himself in. It’s an Ure fish, which means red fish, similar to red snapper.

One other point worth noting: Norway is one of the few countries that still hunts whales for meat.

(The others include Iceland, Japan, and a few tiny island nations.)

Norways catches a few hundred Minke whales, mostly in waters at the northern end of the nation.

Minke whales are not considered an endangered species, although their numbers—like all other varieties of whales—are greatly reduced.

My wife and I live on Nantucket Island, which for a period of time in the 19th century was the whaling capital of the world.

It way the Saudi Arabia of whale oil.

But the whalers who left from our island on voyages of as much as three or four years did not eat the whale meat. All they wanted was the oil as well as baleen and whale bone.

And today, although Nantucket celebrates its heritage as a whaling port (including the fine Nantucket Whaling Museum), it is at the forefront of a nearly-universal boycott against the harvesting of whale for meat today.

Although I have been to Norway and Japan and Arctic Canada many times, I had never tried whale meat.

Reason 2: Have you ever seen whale meat? It is enough to make you seriously consider vegetarianism.

Well, today, I have a confession.

I went on a market tour with David Bilsland, the leader of the Ecole des Chefs of Silversea.

And we were offered samples of king crab (wonderful…and only about $50 per pound and that includes the shells.

And then, a platter of small pieces of smoked whale.

I hesitated…and then took a bite.

It tasted a bit like beef or caribou. Not bad.

But I felt guilty about it. And I promise never to do it again.

There are other foods to explore without the worry of losing my credentials in the upright citizens brigade.

All photos Copyright 2013, Corey Sandler. To obtain copies, please visit the Order a Photo tab on this blog.