Stockholm is one of the gems of the Baltic, very much worth a visit, especially on a spectacular Scandinavian summer day.[whohit]-Stockholm-[/whohit]

Stockholm was founded about 1250 and has been at the country’s military, political, economic, and cultural center for almost all of that time.

Greater Stockholm spreads across fourteen islands on the south-central east coast of Sweden at the mouth of Lake Mälaren.

We have been to Stockholm many times. If you’re new in town, there are more than a few wondrous major attractions. At the top of my list is the Vasa Museum. You come in from the bright Swedish summer day through a pair of dark glass doors which close behind you. There is another set of dark doors ahead of you.

You exit that buffer zone and enter into a dimly lit hall that holds a nearly intact 17th century ship. It is the 64-gun warship Vasa.

They spared almost no expense in building the Vasa, equipping her with the latest technology and outfitting her in great style. Vasa was completed in 1628, and set sail on her maiden voyage. She did not get far.

Within a mile, the ship rolled over and sank in the harbor.

For all of the money spent on her construction, they should have spent just a few more kroner on engineering. The ship was top heavy.

The cold water and silt of the harbor preserved her. When Vasa was rediscovered in the 1960s, the Swedes employed modern technology to raise the ship and preserve it in one of the finest museums of its type anywhere in the world.

The Swedish Royal Family has been busy with two weddings and a baby shower in the past few years. But I don’t think they have to worry about running out of space for the in-laws and the sisters, cousins, and aunts.

The Stockholm Palace (Stockholms slott) is the official residence and major royal palace of the Swedish monarch.

The palace has 609 rooms and is one of the largest royal palaces in the world still in use.

It is located on Stadsholmen (“city island”), in Gamla Stan (the old town).

King Carl XVI Gustaf and the other members of the Swedish Royal Family have offices here, and there are formal rooms for state occasions.

You can visit the Royal Palace in town, or one of the many, many others in the country. There’s Drottningholm, the current private residence of the royal family. And Rosersberg out in the suburbs. An often-overlooked palace—very close to town—is Rosendal, a pleasure palace built in the 1820s for the imported French marshal who was brought in to head the Swedish royalty.

You can stroll the streets for shopping or dining, or just to absorb the warmth that seems to infuse the personality of most locals; I have a theory that they are soaking up the sun and storing away its warmth in preparation for the not-so-sunny and much colder winter to come.

But, as I said, we have been here many times before. On this port call we set about to visit some of the lesser-visited jewels of Stockholm.

A Wheel Over Stockholm

We began by taking the Metro to the developing suburb of Globen where a set of arenas and shopping malls is sprouting like mushrooms. The biggest of the mushrooms is said to be the largest spherical building in the world; it is an arena used for ice hockey, basketball, and concerts. And on the outside is a most unusual piece of engineering called Skyview.

It looks like a half-completed Ferris wheel. The glass cars are not hung from the frame of a wheel; instead they ride on a track on the outside of the building. It is a most impressive piece of engineering. The view: well, it’s pretty enough. 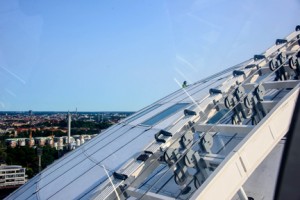 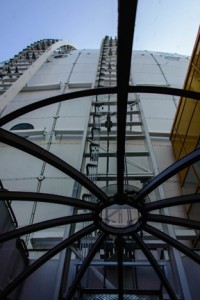 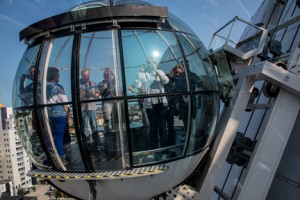 Next we headed for The Maritime Museum, another gem not often visited. It contains ship’s models and artifacts, as well as the entire stern and part of the opulent captain’s quarters of yet another significant ship from Swedish history: the Royal Schooner Amphion, completed in 1778 and in service until 1885. 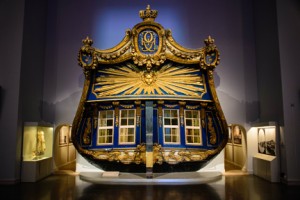 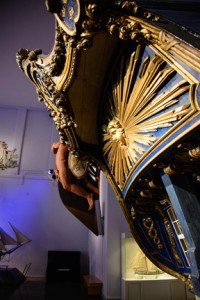 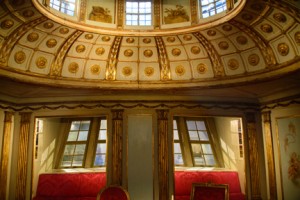 The Royal Schooner Amphion at the Maritime Museum 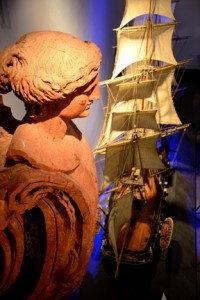 A figurehead and ship’s model at the Maritime Museum

On our list for a visit was the Hallwyl Museum, a magnificent palace in the heart of Stockholm. I call it a palace, because few other words would suffice. However, this was the private residence of the von Hallwyl family. The patriarch was a baron of a different type: a lumber baron.

This treasure is nearly in the center of Stockholm, not far from the Dramatiska Teatrn, the ornate gilded theater near the end of the main harbor. 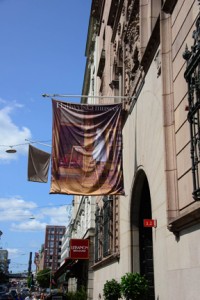 The spectacular dining room and private rooms would more than suit a royal. Most of the furnishings were given by the family for the museum. 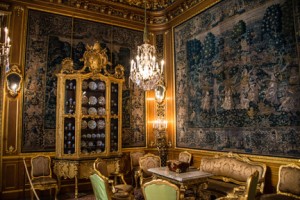 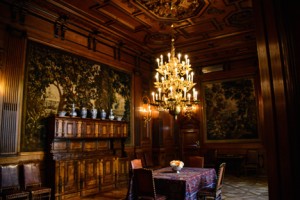 In a special exhibition, we saw some of the clothing of the time: men’s formal wear as laid out by a proper valet. (Downton Abbey’s Bates would approve.) And in another room, a display of ladies’ “unmentionables” which looked to me more like protective armor than underwear. 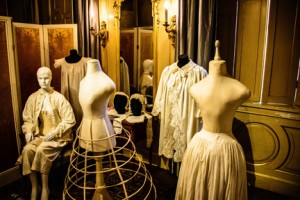 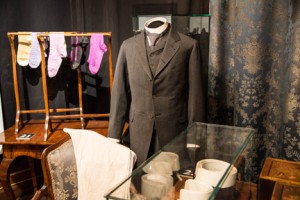 The Swedes have a pretty fierce history of military scuffles: with Denmark-Norway, Napoleon, and the various trading unions of the Baltic.

But in modern times, one of the fiercest powers was a group of four musicians who played catchy tunes and wore a lot of Spandex.

In May of 2013, Stockholm was invaded by ABBA: The Museum. 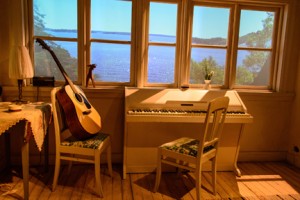 A recreation of one of the places where some Abba songs were written, or so they say

It is located on Djurgaarden island, next to the 17th-century Vasa museum and the Skansen outdoor museum.

For better or for worse, the four members of Abba are back together, dressed like the 1970s never ended.And they’re still collecting royalties. 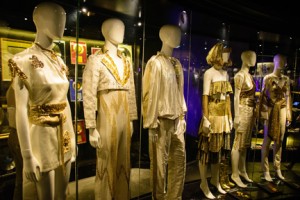 Costumes of the Abba people

In one room, computer-generated holograms are projected on a stage with an extra microphone, and for no extra charge you, too, can lip-sync to an Abba song and dance with strange, jerky motions. 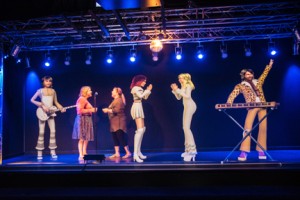 You, too, can lip-sync and twitch on stage

In fact ABBA has never sounded better…that is to say, modern technology may make them sound better than they ever did…or perhaps the passage of time heals all wounds.

Sorry, but they just don’t ring my chimes.

But the museum was packed and the visitors seemed to greatly enjoying the music.

All photos copyright 2013 by Corey Sandler. If you would like a copy of any photo please contact me.