REYKJAVIK, ICELAND: A WILD RIDE TO THE MOON

We arrived in Reykjavik on Wednesday night, more than 12 hours late. It wasn’t a traffic jam that held us up, but rather a pretty fierce ocean storm between the northern reaches of the United Kingdom and Iceland.

While we were in Belfast, with plans to move out the next night to Stornoway on the Isle of Lewis in Scotland, our very capable and cautious captain Angelo Corsaro wore a ridge in his worry beads. There was a storm, with huge swells and high winds, heading our way.

The decision was to stay overnight in Belfast and delay our departure before heading west toward Iceland. Doing that would give us the chance to come below the heart of the storm and miss its worst effects. It also meant we would have to skip our call at Stornoway, which was a shame: I had planned on shopping for a replacement for my 20-year-old Harris Tweed jacket at the looms there.

The plan worked, but we can only imagine how bad it would have been if we had attempted to stay on schedule. We traveled for two days in an extra-tropical hurricane—the remnants of Humberto—that spread in a spiral more than a thousand miles across.

Barometic pressure dropped below 960 hectopascals; that’s way low. And that low pressure engendered high winds of as much as 95 kilometers or 55 miles per hours. Wave heights were as much as 30 to 35 feet.

That said, Silver Whisper acquitted herself very well. The stabilizers stabilized most of the roll and our navigational plan reduced much of the pitch from bow to stern. But it was a noisy, somewhat bumpy ride.

Throw things at me if you will, but I am one of the horrible people who actually enjoys the feeling of motion on a ship.  Excuse me while I duck the plate someone just threw at me.

Most of our guests managed quite well, and I gave three lectures during the storm. The guests in the theatre were nicely seated; I was the one sliding to and fro on the stage.

What do you do if you get lost in a forest in Iceland? Stand up.

That’s a local joke in and around Reykjavik, which—to be charitable—is not the most green place on the planet. Green as in trees, that is. When it comes to sustainable energy, they’re way beyond Green. 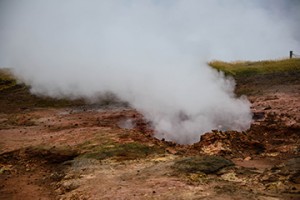 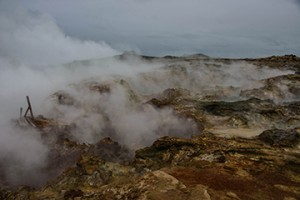 Hot springs and fumaroles just outside of the capital city of Reykjavik on the Erykjanes Peninsula. Photos by Corey Sandler

We’ve been to Reykjavik many times. It is one of our favorite places because of the spectacular landscape. In and around the capital city is mostly a lunar landscape, but the rest of the island includes green meadows, huge icefields and glaciers, waterfalls, and rocky coasts. 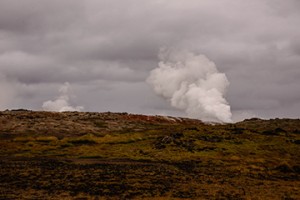 A hot spring and a hot geothermal plant. Photos by Corey Sandler

The weather, though, is always challenging.

When we arrived Wednesday night we were heartened by the fact that the sky was clear. There was a hunt of the Northern Lights, obscured by the artificial lights of the city.

But when we awoke Thursday, we were back in the rain. A cold rain. In places just a few degrees above the point where we would have been in a snowstorm. 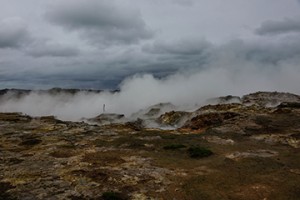 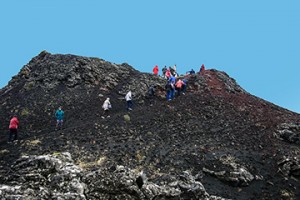 Climbing a (small) volcano for a peek within. Photos by Corey Sandler

Before I met guests on our tour, I spoke with a local, asking for the forecast. What a shame, she said, it has only rained here twice this summer. She took a beat, and then continued: once for 20 days, and the next time for 40.

So we dealt with the rain but still had a glorious time at hot springs, hot geysers, and lava all around.

At the hot springs there is a distinct odor of sulphur in the air. The Icelanders, of course, have an explanation: the hot water they use to heat their homes and fill their tubs comes second-hand, they say. The trolls have already bathed in it, which accounts for the odor. 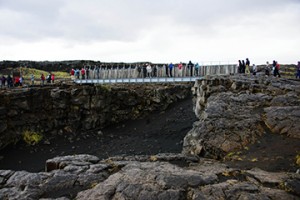 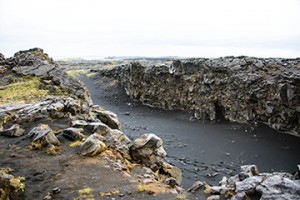 Iceland is split down the middle by a fissure, one side moving toward Europe the other toward the United States. Insert your own political commentary here. At this bridge, we walked from one continent to the other, at least as defined by geographers. Photos by Corey Sandler 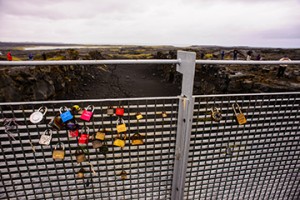 Love Locks again, on the bridge between the continents. Photo by Corey Sandler 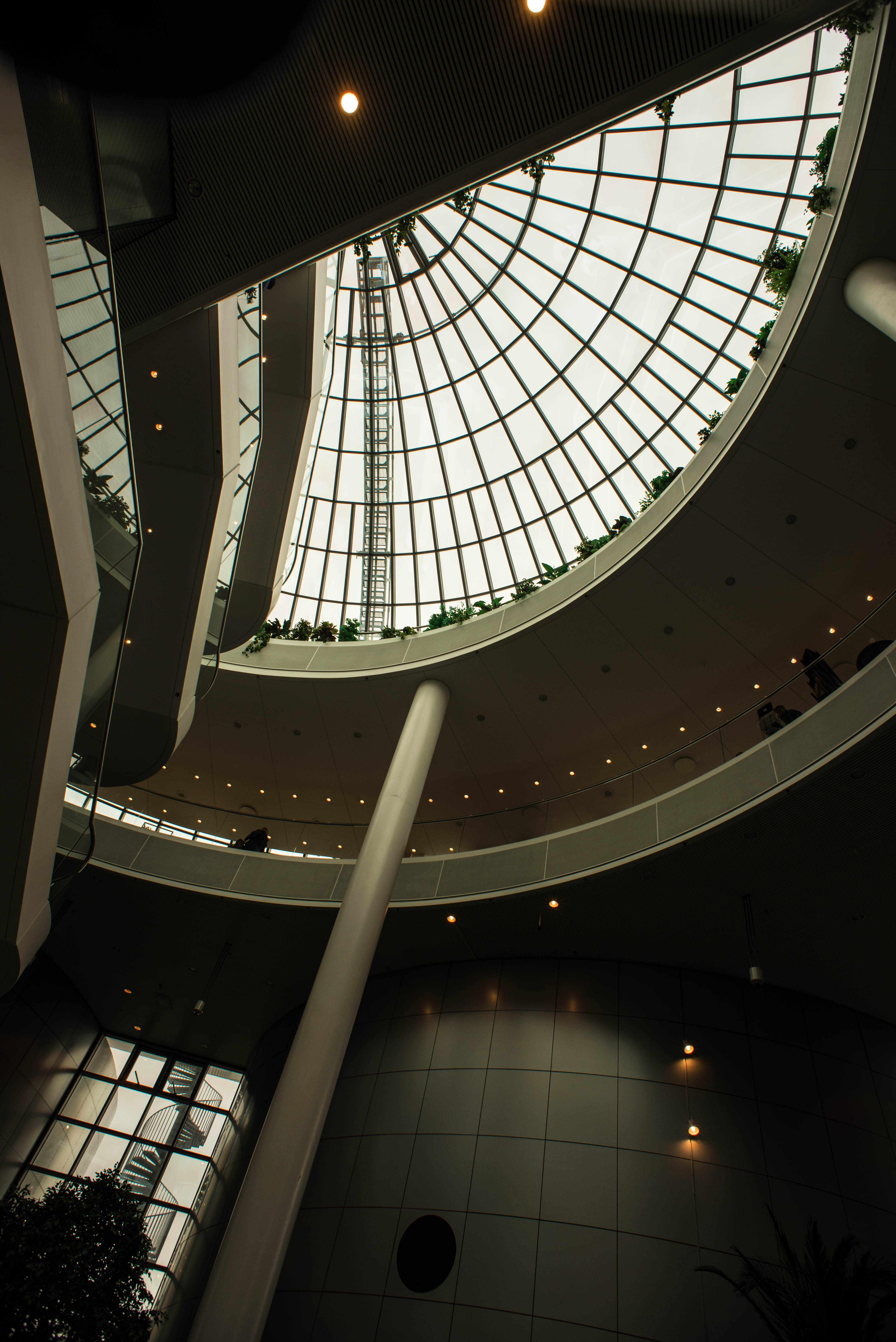 Inside the Pearl, a huge storage tank for geothermal water in Reykjavik. There’s a gift shop, too. Photos by Corey Sandler

The solution, I learned, is to hire ourselves a magician to clear the skies ahead of us as we head out tonight for Greenland. When Icelanders refer to a magician or a wizard, they speak of someone who “knows beyond his nose.”

Presumably that means brimstone and sulphur is not involved.

All photos copyright 2013, Corey Sandler. If you would like a copy please contact me through the Order a Print tab on this blog.