Qaqortoq, Greenland: Easier to Say Than to Get to

Greenland is, by area, the world’s largest island that is not a continent.

About 80 percent is covered by snowfields and glaciers…which partly helps explain why today it is also the world’s least densely populated country.

About 90 percent of the residents are native-born Ka-la-al-lit, the local tribe of Inuit people.

There are, depending who you ask, either TWO or FOUR stoplights in the entire country.

Then again, there are only about 2,500 cars in all of Greenland.

And only 150 kilometers or 90 miles of road, only about half of which are paved.

Qaqortoq is hard to find on a map, but I suspect the Greenlanders like that quite a bit. It is pronounced as if that middle Q was a hard H: Ka-HOR-tock. 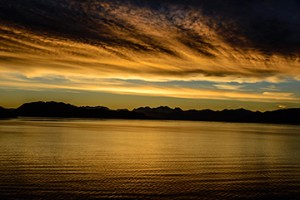 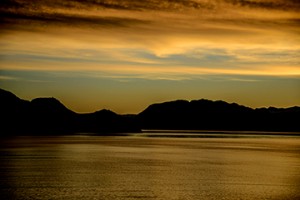 The settlement, near the southern tip, is—like all of the Inuit villages I have visited in northern Canada—a very matter of fact place, just like the Inuit people.

There are some prefab Scandinavian houses, some boxy shops, and a few commercial enterprises: a sealskin tannery, a shipyard, and an open-air market. 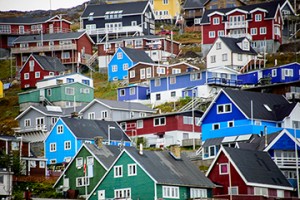 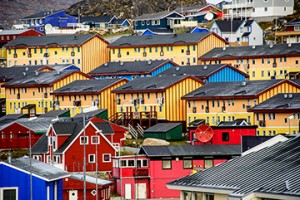 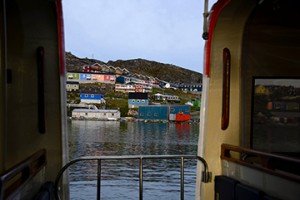 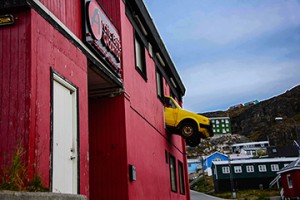 Arriving in Qaqortoq by ship’s tender; a far north nod to a famous bar. Photos by Corey Sandler

But it is Greenland, one of the far corners of the world, and that is very apparent to every visitor. And because it is late September, there was also very much of a feeling of the imminent arrival of winter. In fact, the dock was coated with a bit of coarse snow when we arrived on ship’s tenders at 8 in the morning. 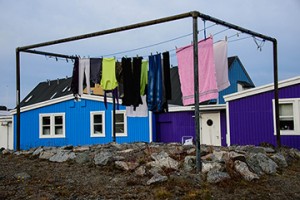 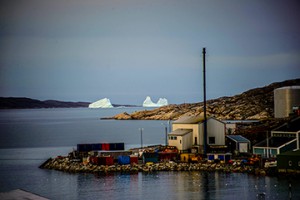 Laundry on the line, and the way out of town through Iceberg Alley. Photos by Corey Sandler

I led a group of guests on a photo safari up the hill and around to the heliport—the only way other than seasonal boats—to get in or out of town.

And then we went to the market, although we chose not to purchase any of the whale meat that was being cut up on the tables there. Standing next to a chunk of whale meat is enough to convert a butcher to a vegetarian. 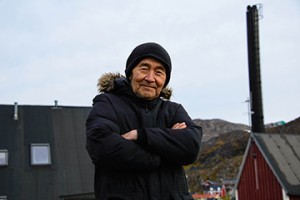 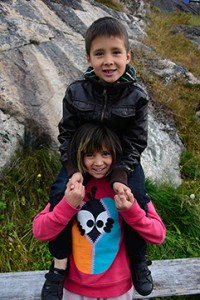 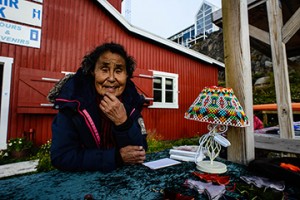 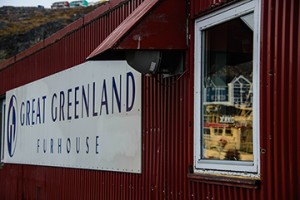 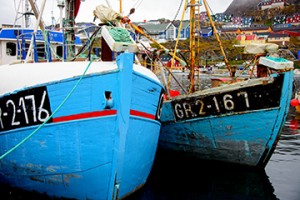 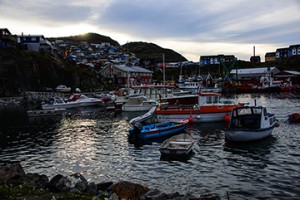 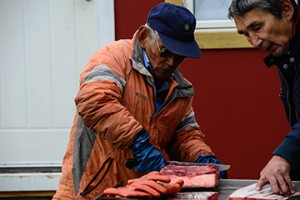 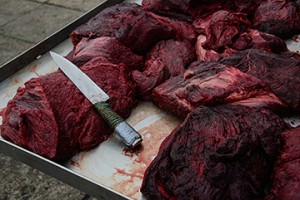 The Queen of Denmark in Sealskin Shorts

In 1721, Scandinavia came back when Denmark claimed sovereignty over the island.

In November 2008, Greenlanders went to the polls for a referendum.

More than 70 percent of voters turned out, and almost 76 percent approved a motion for independence from Denmark.

On June 21, 2009, in a mix of solemn ceremony and giddy celebration, Greenland welcomed self-governance.

Queen Margrethe II of Denmark, handed over the official document bestowing self-governance to the chairman of Greenland’s Parliament.

Marching in Nuuk, she wore the traditional Inuit outfit for a married woman: shorts made of seal fur and a beaded shawl.

All text and photos copyright 2013 Corey Sandler. All rights reserved. If you would like a copy of a photo please contact Corey Sandler through the box on this page.