You Say Goodbye, We Say Hello

And so we hauled anchor at Martha’s Vineyard and proceeded west at full speed through rolling seas: 45 mile-an-hour winds and 6-to-8 foot swells.

We were sailing into the storm that was heading for Martha’s Vineyard…but by 6pm all was calm and at 8pm we sailed beneath the Verrazzano Narrows Bridge that marks the entrance to New York Harbor. 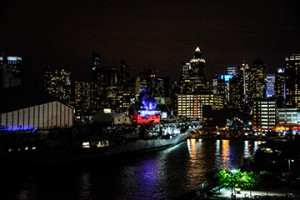 Giovanni da Verrazzano arrived at the mouth of the river in 1524, but apparently did not progress much further. He believed that it was just a big lake.[whohit]-NEWYORKSAILIN1-[/whohit]

There were others who explored nearby, but it was Henry Hudson who progressed 160 miles up the river in 1609, ready to greet the emperor of China. No such luck, but the mouth of the great river is now the site of the great city of New York.

I was up on the bridge giving commentary to our guests. 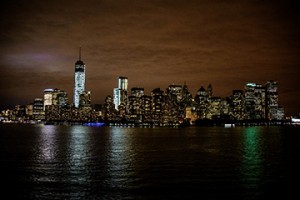 New York from the nighttime arrival of Silver Whisper. Photo by Corey Sandler 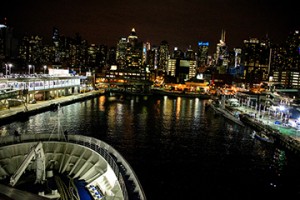 I asked the pilot whether there was anything unusual going on as we headed for the Ambrose Channel and then up the Hudson River.

“Other than the fact that there’s a cruise ship coming in at night, no,” he said. 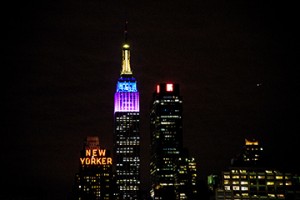 The Empire State Building, from the Hudson River. Photo by Corey Sandler

Actually, there was one other special event: a private party had planned a fireworks display near the USS Intrepid museum on the West Side of Manhattan. That happens to be next door to where we were to dock at Pier 88.

They held off on their celebration until we were safely docked at about 9:15pm. But it was a fitting culmination to a great cruise. 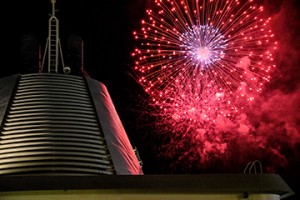 Hooray for Us. Photo by Corey Sandler

We wish safe travels to those guests leaving us in the Big Apple.

And we declare: Welcome Aboard to new friends joining us for the trip to Montreal.

Later today, we will back out of the pier, sail down the river and salute Lady liberty before heading to Newport, Boston, Portland, and back up the coast to Canada. 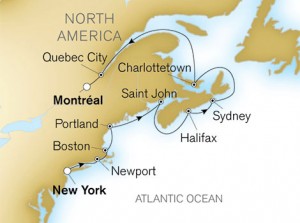 All photos and text copyright 2013 by Corey Sandler. If you would like to purchase copies, please contact me.