Time Travel in the Canadian Maritimes

To me, one of the appeals of Sydney, Nova Scotia is that it allows me to time travel back to a time I once knew: the 1950s.

It is one of the only places in North America where I could direct you to a cobbler to have your shoes resoled.Or a seamstress or tailor.[whohit]-SYDNEY-CHARLOTTE-2-[/whohit]

Or old Doc Archibald with his office in an old Victorian behind a white picket fence. 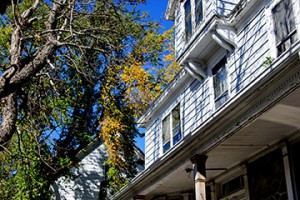 Sydney, Nova Scotia. The colors of autumn in a place frozen in time. Photo by Corey Sandler

From 1784 to 1820, Sydney was the capital of the British colony of Cape Breton Island. The colony was merged with neighboring Nova Scotia when the British decided to develop the abundant coal fields surrounding Sydney Harbor.

By the early twentieth century Sydney was home to one of the world’s largest steel plants, fed by the coal mines of the Dominion Coal Company. By the late 1960s both coal and steel industries were failing, and were taken over by federal and provincial governments. That lasted until late in 2001 when they could not be sustained any further. 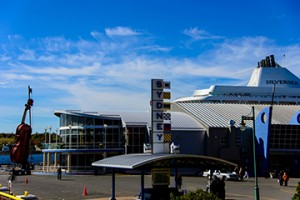 The cruise terminal in Sydney with Silver Whisper at the dock and a super-sized fiddle along the water. Sydney is one of the centers of Ceilidh, the Celtic-based barn dance centered around that instrument…in a hand-sized version. Photo by Corey Sandler

With apologies to some of my Anglophone Canadian friends, when I speak of this region I use French pronunciations for places like Bras d’Or (the Golden Arm) and Louisbourg.

I do this knowing that for the locals, the same places are often called LEWIS-BURGH and something close to BRASS DOOR.

See my Blog entry of 3 October 2013 for a recent visit to Sydney and Louisbourg as well as some details about Baddeck and Alexander Graham Bell.

When you think of Stratford-upon-Avon, you think of a certain poet and playwright by the name of William Shakespeare.

We are talking apples and oranges …or jellyfish and lobsters here… but in certain circles around the world…in some of the most unlikely places…Charlottetown on Prince Edward Island is not known for Queen Charlotte, not remembered for the Charlottetown Conference of 1864 that led the way to Canadian Confederation, and not thought of at all for almost anything else…except for the work of a relatively minor author named Lucy Maud Montgomery and a series of novels that begin in 1908 with “Anne of Green Gables.” 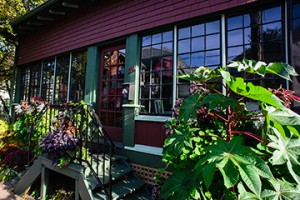 More colors, in a house near the waterfront of Charlottetown, PEI. Photo by Corey Sandler

Anne of Green Gables began as a Canadian bestseller, became an American success, and went on to become an international phenomenon.

For reasons no one hasfully figured out, you are quite likely to find a tour group from Japan…looking for Anne. I think it has to do with the fact that Anne is a girl who is for some about as un-Japanese as possible: feisty, independent, and decked with freckles and braided red hair. They love her in Japan, and come to PEI by the planeload.

I last wrote about Charlottetown in a Blog entry on 2 October 2013. 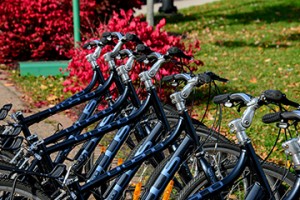 A study in angles and colors in Charlotteown. Photo by Corey Sandler

Charlottetown is the capital of Canada’s least-populated province, Prince Edward Island. The city is the country’s smallest provincial capital, with a population of about 35,000. (Canada’s three territories: Nunavut, Yukon, and Northwest Territories have smaller populations, but they are not provinces.)

The town was named in honor of Queen Charlotte, consort of King George III from 1744 to 1818.

Like Sydney, it is a place where time seems frozen.

I spent the day walking Charlottetown with a group of guests as we conducted a photo safari, hunting the colors of Prince Edward Island.

All text and photos copyright 2013 by Corey Sandler. If you would to purchase a copy of a photo, please contact me.