I don’t know anyone who doesn’t love Barcelona…except someone who hasn’t been there yet.

Here we bid arrivederci until we meet again, to friends from previous cruises and welcome aboard new friends as we proceed deeper into the Mediterranean. 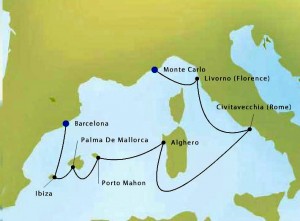 Our next voyage, from Barcelona to the Balaeric Islands, Sardinia, Rome, Livorno, and Monte Carlo.

Barcelona is Spain’s second largest city, after Madrid, the capital. The metropolitan area is home to about 3.2 million.[whohit]-5APR2014 BARCELONA-[/whohit]

Founded by the Romans, Barcelona became the capital of the Counts of Barcelona, and then one of the most important cities of the Kingdom of Aragon. The town was well established by 15BC when the Romans re-cast the town as a castrum or military camp.

The center of the settlement was on a small hill near the current city hall at Plaça de Sant Jaume. In the Barri Gòtic (Gothic Quarter), the Roman grid-plan is still apparent in the street layout and some fragments of the Roman walls have been incorporated into the cathedral.

The city was conquered by the Visigoths in the early fifth century and by the Moors in the early eighth century. Then it was reconquered in 801 by Charlemagne’s son Louis, who made Barcelona the seat of the “Spanish Marches”, (Marca_Hispanica) a buffer zone ruled by the Count of Barcelona. 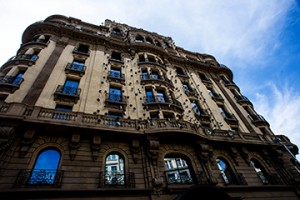 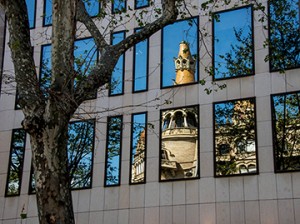 The most famous street in Barcelona is Las Ramblas, or the Promenade. It runs up from the harbor through its historic districts and toward the Cathedral and Sagrada Familia.

The street signs call it La Rambla, the Promenade. But it’s actually a series of linked streets, so it is commonly referred to in the plural, Las Ramblas. The name rambla refers to an ebbing and flowing waterway, derived from the Arabic ‘ramla’ which means ‘sandy riverbed’.

At the base of Las Ramblas, is the Museu Maritim (Maritime Museum) in the drassanes or shipyards where the great Catalonian fleet was constructed. The Columbus Monument, which stands nearly 200 feet tall, is located near the site where Columbus returned to Spain after his first voyage to the Americas.

The statue is said to depict Columbus pointing toward the New World with his right hand, a scroll in the left. However, his hand actually points east, which could be a mistake or it could show the direction toward Genoa, where Columbus may or may not have been born.

Each section of La Rambla has a specialty for the street vendors and some of the shops. La Rambla de les Flors is devoted to flower stands. Another section sells birds, monkeys, and pets.

The beautiful Gothic Quarter was the location of the ancient Roman village. It lies to the right of Las Ramblas as you go up from the harbor. Narrow, winding streets are like a labyrinth. El Barri Gòtic is home to the Cathedral of Barcelona, the Catalan government hall, the and l’Ajuntament (the Barcelona city hall).

One of the jewels of Barcelona is its old cathedral, in the Gothic Quarter. The oldest known religious structure on this site was a basilica with three naves built about 343. There may have been a Roman temple on the site even before then. The basilica was destroyed by Moorish invaders about 985.

And then we come to the modern building, Santa Església Catedral Basílica de Barcelona. Begun in 1298, it is certainly has a place on the list of lengthy construction projects: the façade was completed in 1898 and the final spire in 1913.

Barcelona Cathedral (also known as La Seu) is a triumph of Catalan Gothic architecture. Especially notable is the Cappella de Sant Benet behind the altar, with a magnificent 15th-century interpretation of the crucifixion by Bernat Matorell.

The crypt beneath the high altar contains the alabaster sarcophagus of Santa Eulalia, patroness of the cathedral and co-patroness of the city. The virgin daughter of an upper-class Barcelona family, Eulalia was said to have been burned at the stake in 304 by the Romans.

The cathedral’s 14th-century cloister is known as “the loveliest oasis in Barcelona.” Its vaulted galleries overlook a lush garden filled with orange, medlar_(apple-like_fruit), and palm trees surrounding a pond.

The cloister is also home to a gaggle of white geese whose ancestors have lived here for five centuries, a bit unusual for a cathedral. One legend says they represent the virginity of Saint Eulalia or the former splendor of Rome.

Few cities are more imbued with the artistic vision of one man than is Barcelona. The visions, and some of them are a bit strange—were those of Antoni Gaudi, one of the masters of the Modernist or Art Nouveau style.

There are works by Gaudi throughout the city. Most begin with elements of Spanish Gothic, mix in Modernism, and finish off with phantasmagorical flights of fancy. 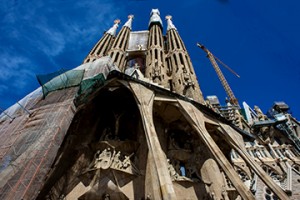 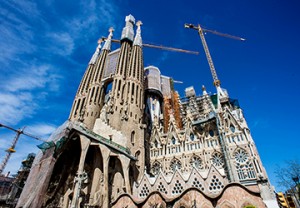 La Sagrada Familia, still under construction, one of the wonders of the world. Photos by Corey Sandler

Gaudi was born in Reus in 1852, the son of a coppersmith. Over his career, Gaudi developed a sensuous, curving, almost surreal design style. With little regard for formal order, he juxtaposed unrelated elements at every turn. It is Gothic architecture, warped by modernism, if you will.

In his youth, Gaudí was sickly and spent much time in isolation. Gaudí was inspired by nature, he says, because: “Those who look for the laws of Nature as a support for their new works collaborate with the creator.”

He studied architecture in Barcelona from 1873 to 1877. When he was given his diploma, a school official is said to have wondered if Gaudi was a nut or a genius.

His first major commission was in 1878 for a private residence in Barcelona for the industrialist Manuel Vicens. The basic structure of Casa Vicens is Gothic Revival, but quite unlike the somber black and gray buildings you may associate with that style.

He mixed in Art Nouveau and Moorish elements, and some very flashy ceramic tiles from the factory owned by Vicens. The home—today a private residence—is in the Gràcia district of Barcelona. 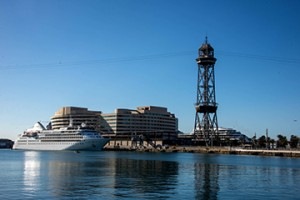 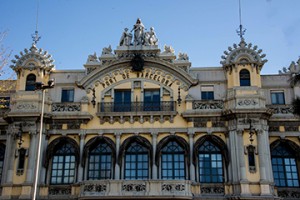 Silver Wind at the dock in Barcelona; nearby the old port of Barcelona terminal. Photos by Corey Sandler

Parc Güell is a magical mystery tour of a municipal park, another Gaudi wonder. Disneyland for adults, but much more fulfilling. The park, on the hill of el Carmel in the Gràcia district, was built from 1900 to 1914, originally intended to be a housing subdivision, the idea of Count Eusebi Güell­.

The buildings flanking the entrance have fantastical roofs with unusual pinnacles and curves. The focal point of the park is the main terrace, surrounded by a long bench in the form of a sea serpent.

To get just the right curve for the bench surface, Gaudí sat a naked workman in the wet clay.

Casa Milà  was completed in 1912 in the Eixample district as a private house. Nevertheless, it is a wondrously wavy and whimsical creation. One of our favorite places in Barcelona is up on the roof of La Pedrera.The building, the roof and an apartment within are open daily for tours.

I highly recommend it as a way to really get close to the mind and hands of Gaudi. This was a man who could not stand the thought of an undecorated wall or a straight line. Even the arch supports for the roof are works of art. 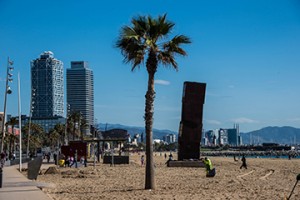 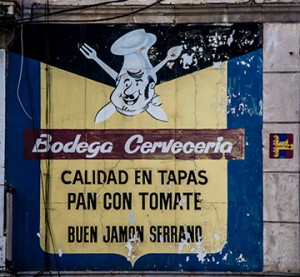 Along the waterfront north of the city is the Maremagnum and Barceloneta beach and entertainment district. It’s just another facet of the marvelous city of Barcelona. Photos by Corey Sandler

Casa Milà was mockingly nicknamed La Pedrera (Castalan for “the quarry”), a name it now bears with pride.

Gaudí began his work as a secular architect and artist, but in his later years he devoted his life to the Catholic church. His crowning achievement was—or will be—La Sagrada Família, the Holy Family.

Technically, it is not a cathedral—home to a bishop. Its full name is the Basilica and Expiatory Church of the Holy Family. 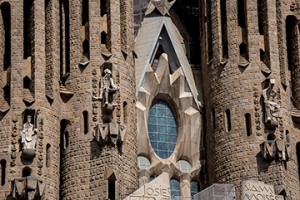 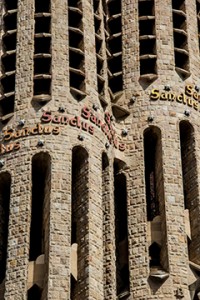 Details of La Sagrada Familia. Construction is scheduled to be completed, perhaps, in 2026. Photos by Corey Sandler

Gaudi designed it to have 18 towers: 12 for the apostles, 4 for the evangelists, one for Mary and one for Jesus.

As he began work, his closest family and friends began to die. Gaudi’s pace of work slowed, and he fell on hard times economically.

Work on La Sagrada Familia came to a halt. In 1918, Eusebi Güell, his principal patron, died.

Gaudi became a recluse, concentrating entirely on the church.

He spent the last few years of his life living in its uncompleted crypt. On June 7, 1926 Gaudí was run over by a tram. Because of his ragged clothing and empty pockets, he was taken to a paupers’ hospital in Barcelona. Nobody recognized the injured artist until friends found him the next day.

When they tried to move him to a nicer hospital, Gaudí refused, reportedly saying “I belong here among the poor.” He died three days later at age 73. He is buried at La Sagrada Família. 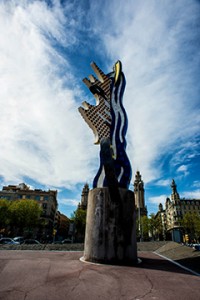 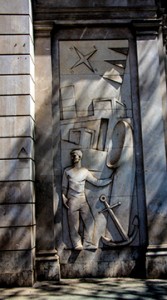 More art in Barcelona. At left a contemporary salute that echoes a bit of Gaudi. At right, a sculpture from the Franco time of order. Photos by Corey Sandler

Gaudí was constantly changing his design, and the only existing copy of his last known blueprints was destroyed by anarchists in 1938 during the Spanish Civil War. This has made it very difficult to fully complete the church in the fashion Gaudí intended.

Like many of you I have visited hundreds of cathedrals all over the world, many of them many centuries years old.

Gaudi’s La Sagrada Familia may well be the last monumental cathederal to be built, and it is amazing to watch the work underway.