For geographers and travelers, here’s one of those relatively unusual cases where a place name has some logic:

Grand Canyon I get.

Long Island I get.

In the Balearic Islands we have Mallorca—the major island. Good name.

And so we also have Menorca, from the Latin phrase Insula Minor, the minor island. Menorca is smaller than Mallorca.

So far so good, except that Menorca is not the smallest of the Balearic islands. Ibiza is in second place, ahead of Menorca. But Menorca lies near Mallorca, and therefore it is the minor of the two islands. 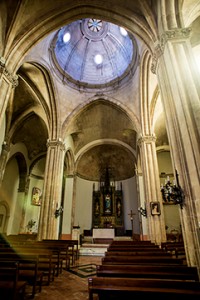 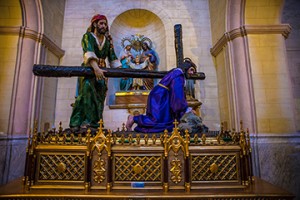 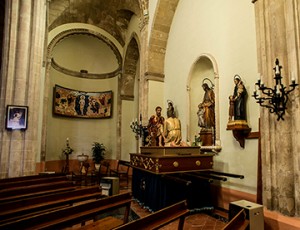 As Holy Week approaches, cathedrals and churches throughout Menorca were bringing out icons to be paraded through the streets and in a circuit of the island, Photos by Corey Sandler

Porto Mahon’s name is believed to come from the Carthaginian general Mago Barca, brother to Hannibal, thought to have taken refuge here in 205 BC.

Menorca is known for its megalithic stone monuments: navetes, taulas, and talaiots, which speak of a very early prehistoric human activity.

They were built by what is known as the Talayotic culture between about 1800 and 1000 BC. There are at least 274 talaiots, or talayots in or near the sites of ancient settlements.

A naveta is a chamber tomb unique to Menorca. It has two vertical and two corbelled walls giving it the form of an upturned boat, the source of its name. While some certainly had a defensive purpose, others may have served as lookout or signaling towers.

And then there are the taulas, which are usually found nearby. A taula (the word means ‘table’ in Catalan) is a T-shaped stone monument. Taulas can be as much as 3.7 meters or 12 feet in height. They consist of a vertical pillar (a monolith or several smaller stones on top of each other) with a horizontal stone lying on it. A U-shaped wall often encloses the structure.

Similar but not necessarily related are the “nuraghes” of Sardinia, the “torre” of Corsica, and the “sesi” of Pantelleria, an island off Sicily.

It is, though, believed there was a connection—or at least an influence—on Menorca from other Mediterranean cultures, including the Minoans of ancient Crete. Some of the same features found at Knossos on Crete are seen on Menorca. 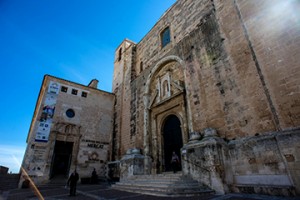 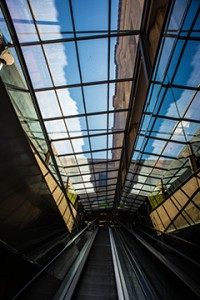 The Carmelite Church, from about 1770, is still in use. Alongside it, the former cloister has been converted into the municipal market. Photos by Corey Sandler

The two official languages are Catalan (including a dialect called Menorqui), and Spanish. Without getting too deep into the weeds here, Menorqui has some unusual components that are closer to Sardinian than Spanish or Italian.

Many civilizations have been through the Balearic Islands. Some left bad tastes, some good ones.

Lingering British influence is seen in the Menorcan taste for gin. At most of the many festes held on the island, gin is mixed with bitter lemon to make a drink known as a Pomada. Actually, it usually does not require a festival for a bit of Pomada.

And here is more important news for gourmands: it appears that a celebrated recipe was brought back to France from Mahon, Menorca, after Louis-François-Armand du Plessis de Richelieu’s victory over the British at the city’s port in 1756.

The sauce was originally known as “salsa mahonesa” in Spanish and “maonesa” in Catalan (as it is still known in Menorca), later becoming mayonnaise as it was popularized by the French.

Did anyone happen to pack a tin of tuna in their suitcase? 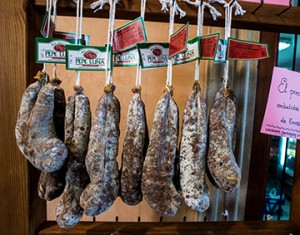 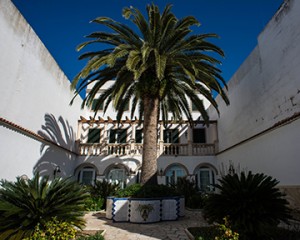 Sausages at the Mercat, and an oasis of a courtyard in the heart of Mahon. Photos by Corey Sandler