Not that there’s anything particularly wrong with Civitavecchia, but most people make it their goal to get out of town.

It’s actually an interesting small city with an old fortress, an impoverished but rich cathedral, and a history that includes the Emperor Trajan and a sculptor and designer named Michelangelo.[whohit]-10APR2014 CIVITAVECCHIA ROME-[/whohit]

Civitavecchia—the name means ancient town—is the port of Rome, about 50 miles away.

The modern city of Civitavecchia was built over an ancient Etruscan settlement. The port was developed by the Emperor Trajan at the beginning of the 2nd century.

The original town was called Centum Cellae, which may have been a reference to the centum (“hundred”) cellae (cells or halls) of the villa of the emperor.

Centum Callae was a Byzantine stronghold in the Middle Ages, then captured by the Saracens in 828. Later it came under control of the Papal States.

In 1696 it became a free port under Pope Innocent XII and soon the main port of Rome.

In the modern era, an event of great importance was the inauguration of the Rome and Civitavecchia Railroad in 1859; today’s track pretty much follows the same route.

During World War II, Civitavecchia was heavily bombed by the Allies to hinder use of the port for supplies and military purposes.

Civitavecchia’s massive Forte Michelangelo is impossible to miss. The designer Donato Bramante was commissioned by Pope Julius II about 1500.

Bramante also produced the original designs for the rebuilding of Saint Peter’s Basilica in Rome. That job was ultimately completed by Michelangelo.

In Civitavecchia, the same thing happened. The maschio or “male” tower was begun by Bramante, but the upper part was finished by Michelangelo and he’s the one who gets the credit. 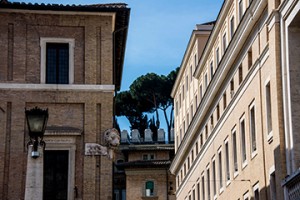 The Pines of Rome, near the Vatican. Photo by Corey Sandler

The fortress was built over an ancient Roman structure, probably the barracks for the Imperial Fleet.  The old bronze chain to raise the drawbridge is still there; on the side jamb the carved words “LEAVE YOUR WEAPONS” are still visible.

The small Cathedral of Civitavecchia, dedicated to Saint Francis of Assisi, was built at the site of a seventeenth century Franciscan church.

Less than an hour away is Tarquinia, an ancient city even by Italian, Greek, or Etruscan standards, dating back at least 1,500 years B.C.

Many of the great families and royalty of ancient Rome came from there.

Etruscan necropolises hold some 6,000 tombs and 200 of wall paintings.

We came, we saw, we conquered…and shopped, toured, and ate in Rome: one of the most stirring, culturally grand, and chaotic cities in the world. 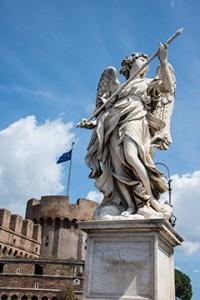 A grandiose name for Rome is The Eternal City. Another nickname, Caput Mundi (Latin for “Capital of the World”) has a history of about 2,500 years.

Neither goes back to the dawn of time, but this is nevertheless a place of great antiquity.

Rome was one of the few major European cities not heavily damaged during World War II, with most of its ancient, Renaissance, and Baroque structures surviving. Allied raids avoided Vatican City and most of the great treasures of Rome, concentrating on the San Lorenzo steelyards, military installations, and outlying areas.

As ground troops advanced toward Rome in June 1944, the Germans declared it an “open city” and there was no significant further fighting as the Allies came in and the Germans retreated.

The Roman Colosseum is near the center of Rome, just east of the Roman Forum. One of the greatest works of ancient Roman architecture, construction began between 70 and 72 AD under Emperor Vespasian, completed in 80 AD under Titus. 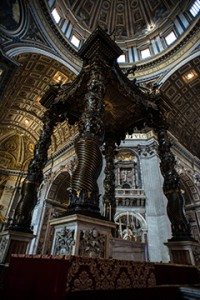 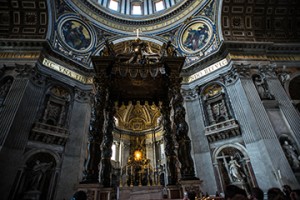 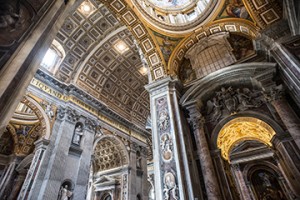 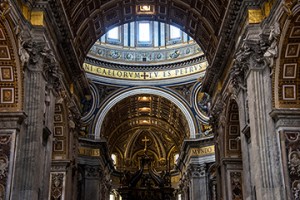 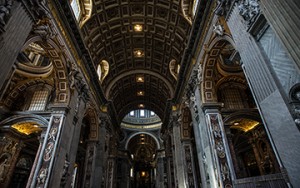 The Colosseum was used for gladiatorial contests and public spectacles, although not all of the images we have in our mind of these events have been verified.

There were hunts of captured wild animals, re-enactments of famous land and sea battles, dramas based on classical mythology, and more than a few executions.

The elliptical amphitheater could seat at least 50,000 spectators. Today’s huge football or baseball stadiums are not much different in concept.

It even had a retractable roof—a bit of canvas awning to shield the most favored from the sun and the elements.

The sovereign city-state of Vatican City is a walled enclave within the city of Rome. It occupies 110 acres, less than half a square kilometer, across the Tiber from the ancient city of Rome. 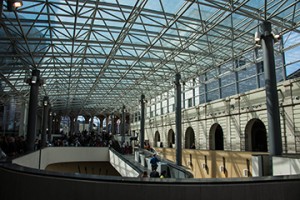 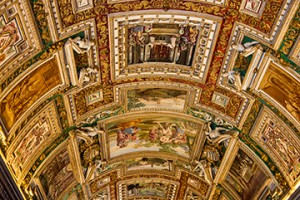 The Vatican Museum is one of the most spectacula (and crowded) museums in the world, receiving 25,000 visitors on an ordinary day. Photos by Corey Sandler

The only way to be a citizen of the Vatican is to get yourself elected Pope or be one of the 800 or so people (and their families) who work for him or the church. 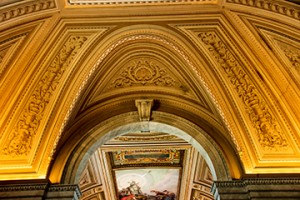 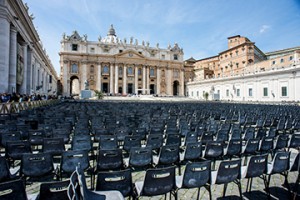 Inside the Vatican Museum, and outside on Saint Peter’s Square where the chairs were already in place for Palm Sunday. Photos by Corey Sandler