The Glories of Florence, a Tower in Pisa, and the Rooftops of Lucca

Livorno is Italy’s second-largest port, after Genoa. It’s a city of some interest itself, although most visitors use it as a gateway to inland gems.[whohit]-Livorno 11Apr-[/whohit]

From Livorno you can easily reach the great city of Florence (Firenze) or see one of the world’s iconic sites, a certain tower in the town of Pisa. Or you can head to beautiful Tuscany, Siena, and Lucca. 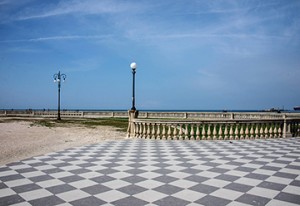 The Terrazza Mascagni along the waterfront in Livorno honors the hometown composer. Photo by Corey Sandler

Livorno, home to about 160,000, is on the Ligurian Sea on the western edge of Tuscany.

Livorno was considered an ideal, or model town during the Italian Renaissance; it is among a relative few Italian towns that was actually planned. 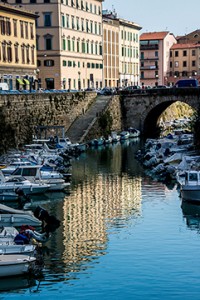 Not Venice, but the Venice District of Livrorno. Photo by Corey Sandler

At the end of the 17th century it was within fortified town walls—a few still stand—and crossed by navigable canals. The remnants are in Livorno’s Venice district.

This region, and especially Florence and Tuscany were advanced places for language, art, and music. The Italian Renaissance was centered around Florence from the 1400s to the 1700s. 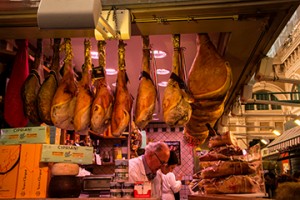 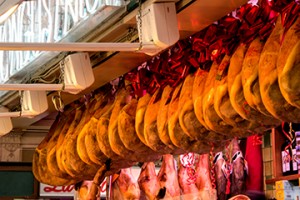 The Central Market in Livorno. Photo by Corey Sandler

Not coincidentally, it was the home of the Medici family, patrons of many of the great artists of the time.

In Florence, the Basillica di Santa Maria dei Fiori was begun in 1296 and completed in 1436. 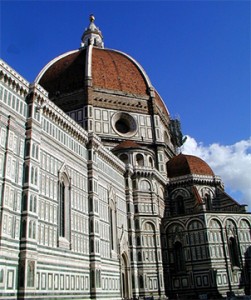 Alongside is Giotto’s Tower. And it is topped with Filippo Brunelleschi’s dome, one of the world’s largest.

The Medici Chapels are the private sanctuaries of Florence’s most influential family of the Renaissance period.

Michelangelo’s David is the centerpiece of the Florence Academy, the Accademia.

Deeper within the Accademia, past David, is a storehouse of antiquities that would be the star of most other museums anywhere in the world. Photo by Corey Sandler

David is certainly quite a man, but my favorite part of the Academy lies deep within, kind of like an art museum’s attic. There are shelves of busts and vases, any of which would be a treasure at a lesser museum.

The largest collection of art in Florence, worth a trip all by itself, is the Uffizi Gallery. Built as the offices—the Uffizi—for Florentine magistrates, it became a museum in the 17th century.

By most appraisals, the world’s greatest collection of Italian masterpieces.

And there’s this old bridge, the Ponte Vecchio (which means, old bridge). It’s lined with shops and tourists.

It’s also an easy way to cross over the River Arno to the Oltrarno, (Beyond the Arno) the Left Bank of Florence, the south side of the Arno.

On the Oltrarno is the fabulous Pitti Palace which includes three major museums. The Galleria Palatina is known for its collection of Raphaels. The Museo degli Argenti (The Silver Museum) for its applied art objects. And Boboli Gardens a handsome landscaped garden with a café.

The Pitti Palace is mostly Renaissance in design. The core dates from 1458 and was originally the little town residence of Luca Pitti, an ambitious Florentine banker.

The palace was bought by the Medici family in 1549 and became the chief residence of the ruling families of the Grand Duchy of Tuscany.

Another of my favorites is Santa Croce, near the Duomo but off the regular tourist beat. It appeals to my preference for unusual mixtures.

The Basilica is the largest Franciscan church in the world, with sixteen chapels.

Construction replacing an older building was begun in 1294 and completed in 1442. The floorplan is an Egyptian or Tau cross (a symbol of Saint Francis).

The architect was Niccolo Matas from Ancona. He worked a prominent Star of David into the composition.

Presumably he had permission from the Franciscans, and presumably they also knew he was Jewish.

Matas had wanted to be buried at the church, but they couldn’t bend that much. Instead he is buried under the porch and not within the walls.

Inside are crypts for some of the most illustrious Italians, including Michelangelo, Galileo, Machiavelli, Gentile and Rossini.

Okay, so there is this city with a tower. Pisa is on the right bank of the junction of two rivers, the Arno and the Serchio, a city of about 87,500.

There is more to Pisa than just the Leaning Tower: at least 20 other historic churches, palaces, and other sights. 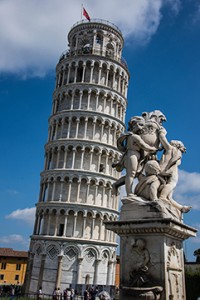 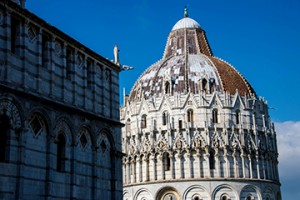 The Tower and the Baptistry in Pisa. Photos by Corey Sandler

In 1063 admiral Giovanni Orlando, coming to the aid of the Norman king Roger I, took Palermo from the Saracen pirates. The gold treasure he took from the Saracens allowed the Pisans to start the building of their cathedral, campanile or bell tower, and baptistry.

Construction began in 1173. Almost immediately, the tower began leaning to the southeast.

The reason was quickly apparent: an insubstantial foundation on loose and wet soil. It took five years, until 1178, for the tower to reach the third floor.

Then construction was halted for almost a century. The Pisans were unsure how to proceed, and they were distracted by wars with Genoa, Lucca, and Florence.

This was actually a stroke of good luck, since it allowed time for the underlying soil to settle. Otherwise, the tower would almost certainly have toppled. 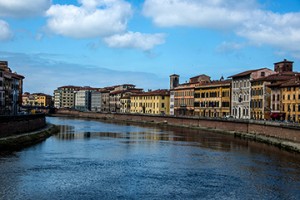 The Arno at Pisa.Photo by Corey Sandler

In 1272, construction resumed. To try to compensate for the tilt, engineers built upper floors with one side taller than the other.

The tower began to lean in the other direction. Because of this, the tower is actually curved, banana-like. 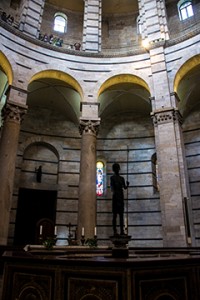 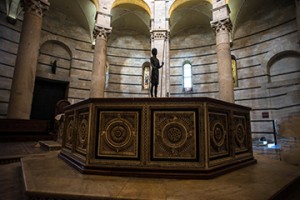 Within the Baptistry at Pisa. Photos by Corey Sandler

In 1990, after several heart-stopping incidents in which modern instruments showed a sudden shift, the tower was closed to the public. The bells were removed to take some weight off the top, and cables were fastened around the third level and anchored several hundred yards away.

The tower was straightened by 18 inches (45 centimetres), returned to the angle it had held in 1838.

Prior to the restoration, the tower leaned at an angle of 5.5 degrees. Today the tower tilts 3.99 degrees southwest.

The medieval walled city of Lucca dates from the time of Caesar, Pompey, and Crassus.

Major sights include the Romanesque Duomo, built in the 13th century;  the Museo Nazionale di Palazzo Mansi; and San Michele in Foro. 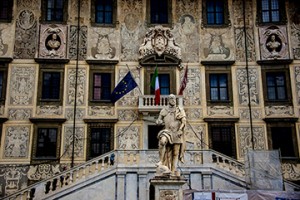 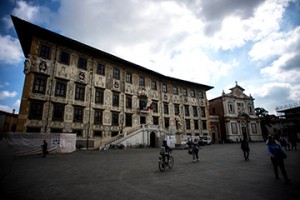 Other gems of Pisa including the Piazza Cavalieri. Photos by Corey Sandler

Or you can go to the former Roman forum and sit at a sidewalk café in the circular piazza and feel like a Lucchesian.

While you’re there, listen for the echoes of favorite son Giacomo Puccini, born in Lucca in 1858.