In Sardinia, the traditionalists are partial to Sardinian, although in Olbia many old-timers speak a dialect of Catalan Spanish.[whohit]-Olbia 16Apr-[/whohit]

But these days the old-timers are much outnumbered by an influx of international persons of great wealth and portability.

We used to call them “jet-setters.”

I think of them as sometimes interchangeable denizens of places like Saint Bart’s, Monte Carlo, and other playgrounds of the party people.

In Olbia itself, much of the older architecture and a bit of the culture is still heavily influenced by the Spanish and the Habsburgs who ruled here for many centuries. 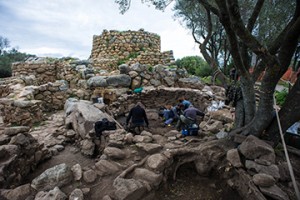 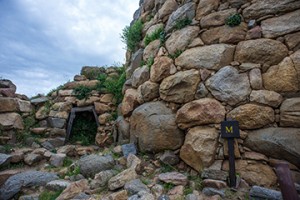 Ancient Nuraghi are scattered throughout Sardinia, most about three to four thousand years old. Archeologists are at work on examining and restoring a major site near Olbia. Photos by Corey Sandler

The newer construction in Olbia and in nearby modern gathering places like Porto Cervo are a little bit Las Vegas, a little bit San Tropez.

The lingua franca is Euros, American Express, MasterCard, and Visa.

And they call the region the Costa Smeralda: The Emerald Coast.

Sardinia is about 23,821 square kilometers or 9,200 square miles, the second-largest island in the Mediterranean. Only Sicily is larger. 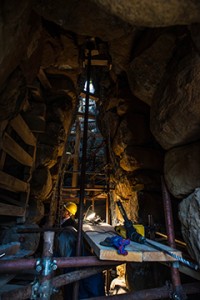 The Greeks, Romans, Carthaginians, Popes, Aragonese, the Dorias, the Italians, and a few others remade the settlements of Sardinia over the millennia.

There’s one other who had an impact in the northeast corner of the island.

Prince Shah Karim Al Hussaini Aga Khan IV has lived far from his family’s historic roots in Persia and Iran for all of his life.

Born in Geneva in 1936 and now a British citizen, the Aga Khan is the 49th and current Imam of Nizari Ismailism, a denomination of Ismailism within Shia Islam. He has an estimated 15 million followers in more than 25 countries.

Most Nizari Ismailis live in African and Asian countries, including Pakistan, Afghanistan, Tajikistan, and Iran. There are also sizeable communities in the United States, Canada, and Britain.

The imam part of his job description accompanies other roles as a business magnate, real estate developer, and racehorse owner and breeder.

His name was regularly found in close proximity to the phrase “international playboy”.

Not to matter: the Aga Khan IV is considered by his followers to be the proof of God on earth as well as infallible and immune from sin.

The Aga Khan claims to be a direct descendant of the Islamic Prophet Muhammad through Muhammad’s cousin and son-in-law, Ali, considered the first Imam in Shia Islam, and Ali’s wife Fatima az-Zahra, Muhammad’s daughter from his first marriage.

According to Forbes Magazine, the Aga Khan is one of the world’s ten richest royals with an estimated net worth of US$800 million, although some think he has a lot more than that.

He is unique among the richest royals in that he does not rule over a geographic territory.

Which brings us to Sardinia.

In 1962, the Aga Khan began development of Porto Cervo and by extension the Costa Smeralda. It grew quickly from a hangout for the Aga Khan and his crowd to become an international destination.

All sorts of characters, including former Italian prime minister Silvio Berlusconi, bought villas there. A large home up on the hill is said to be owned by–or in the possession of–Vladimir Putin. That falls under the category of “interesting if true.” 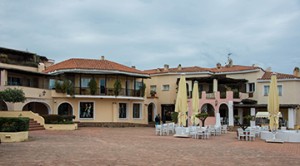 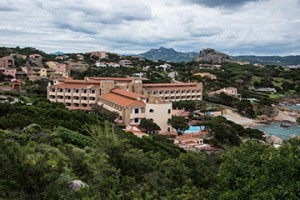 Lifestyles of the rich and infamous at Porto Cervo on the Costa Smeralda of Sardinia. Photos by Corey Sandler

The Aga Khan sold off most of his Sardinian holdings in 2003 to an American real estate baron.

And in 2012, the Smeralda property was sold again, this time to the Qatari royal family (Sheikh Hamad bin Khalifa al-Thani) through the Middle Eastern state’s sovereign fund, Qatar Holding.

Today the Costa Smeralda and Porto Cervo is known for summer events like the Rolex Cup sailing race, 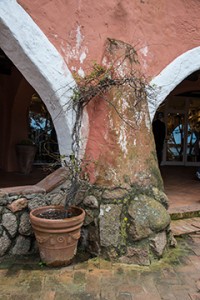 A modern evocation of things ancient, at Porto Cervo. Photo by Corey Sandler

And if you’re looking to buy a little pied-a-terre, consider that luxury real estate brokerage Engel & Völkers ranked Costa Smeralda as the most expensive location in Europe.

All photos copyright 2014 by Corey Sandler, and all rights reserved. If you would like to purchase a copy, please contact me.