Our epic journey leads us from Copenhagen in the Baltic Sea through the Kattegat and into the North Sea, and beyond to the Norwegian Sea.

Silver Whisper swung out to sea and then into one of Norway’s most spectacular waterways, the Sognefjord, to visit Flåm and Gudvangen.

About the name of our first call: if you call it Flam as in ham, they’ll know what you mean.

But the Norwegian and Danish letter Å, with the little diacritical overring at it top, is not “a” but more similar to “o” in most other languages.

The village of Flåm is at the end of the Aurlandsfjord, a small arm of the spectacular Sognefjord which extends in from the Norwegian Sea.

The 204-kilometer or 125-mile-long Sognefjord is said to be the longest and deepest fjord in the world.

Flåm is on one leg of a horseshoe-shaped fjord; at the end of the other leg is Gudvangen, where our ship repositioned in the afternoon.

The sail-in on the Aurlandsfjorden in the early morning is always spectacular; so, too, the sail-out in the still-bright evening.

Not far from the open sea is the statue of Fridtjof at Vangsnes on the Sognefjorden.

Fridtjof was the hero of an Icelandic Viking saga. The original version dates from the 8th century, updated and continued about the year 1300.

German Kaiser Wilhelm II was a regular visitor to this part of Norway, and in 1913 he gave the statue as a gift to the Norwegian people.

Flam has been a tourist attraction since the late 19th century.

Truth be told, though: few people come to see the port.

It’s basically a train station and a few gift shops. The 20-kilometer (12-mile) Flåmsbana railway rises from the town at sea level to the high village of Myrdal on the steepest standard gauge railway in Europe. The trip takes about an hour in each direction. 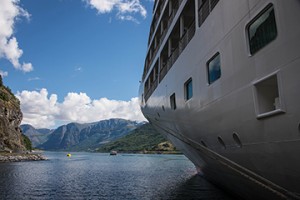 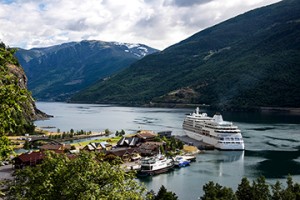 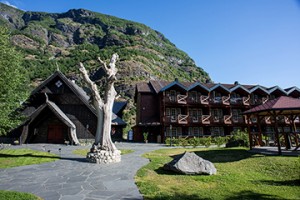 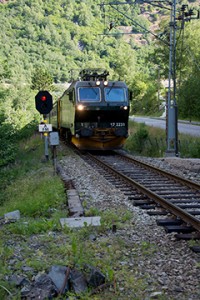 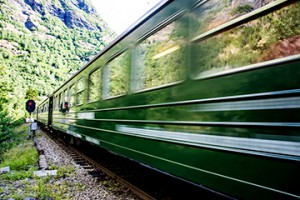 A sunny morning in Flåm, a spectacular setting with a gravity-defying railroad. Photos by Corey Sandler

About lunchtime, Silver Whisper departed Flåm to sail around the corner to God’s Place by the Water.

I’m not attempting to make a religious commentary here.

Gudvangen means just that: “God’s Place by the Water.” 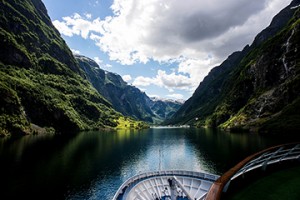 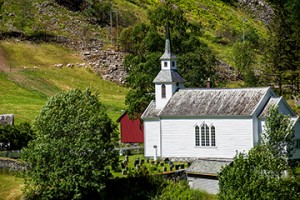 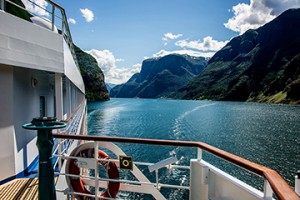 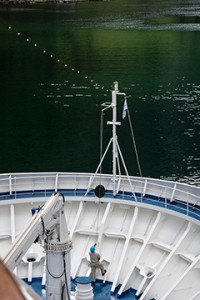 Scenes along the way from Flåm to Gudvangen, ending with the hoisting of the “black ball” to tell other ships we were at anchor. Photos by Corey Sandler 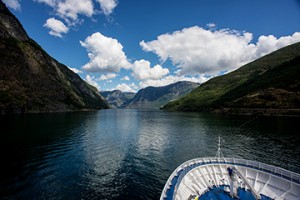