Byzantium. Constantinople. Istanbul. Over the millennia, this place–sitting astride the narrow gap between Europe and Asia–has been both a starting and ending place on a major scale.

Ancient tribes, the Greeks, the Romans, early Christians, rising Muslims, the Crusaders, the Venetians, the warring powers of the first World War, the shadow of World War II, and even today the lines of demarcation between the West and places like Syria and Iran.

I’ve spoken about all of this in my lectures on board ship. And more lies ahead.

This port call marks the end of a great expedition that began in Civitavecchia, the Port of Rome and passed through Sorrento and the islands of Sicily, Malta, Mykonos, and Santorini. For guests who are leaving us here: safe travels. And to new friends: welcome aboard.

The original itinerary for the upcoming cruise had called for a circuit of the Black Sea including calls in Crimea at Yalta, Sevastopol, and on the mainland of Ukraine at Odessa. It should be quite obvious why that is not going to happen now.

It may be a while before cruise ships and tourists can visit Crimea, and Ukraine has larger concerns than entertaining guests right now.

Let’s hope for a return to peace and stability and tourism. If not now, then soon.

And so our itinerary calls for an exit from Istanbul to several interesting and less-visited ports: Kavala, Thessaloniki, and Volos in Greece, a stop at the port of Athens at Piraeus, and then Izmir, Turkey. After that detour, we’ll head back into the Dardanelles and make a visit to two ports on the Black Sea that have come out from under the Soviet thumb: Constanta, Romania and Nessebur, Bulgaria. And then we’ll be back in Istanbul. 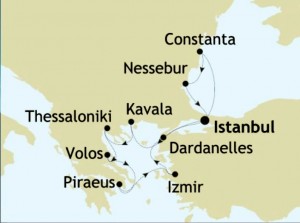 And a few photos from recent visits I have made to Istanbul: these from Dolmabahçe Palace, the last Ottoman palace, just up the coastline from where Silver Cloud docks.

All photos by Corey Sandler. All rights reserved. If you would like to purchase a high-resolution copy any photo, please contact me.