Through its location and its history, Rhodes has faced in many directions.

Rhodes has looked east and north to Turkey in the eastern Aegean Sea 11 miles away, looked north toward Asia Minor, south toward Egypt, southeast to Jerusalem, and west toward Europe and the mainland of Greece.

It is, of course, most famous as being the site of the Colossus of Rhodes, one of the Seven Wonders of the World.

There really was a great statue at or near the entrance to the harbor in Rhodes. And it probably was worthy of wonder. But we don’t know exactly where it stood, what it looked like, and where it has gone. 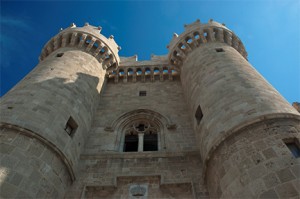 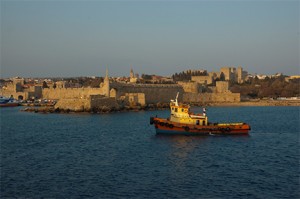 Rodos, the principal city of Rhodes. Somewhere around here stood the Colossus. Photos by Corey Sandler

Rhodes is the largest of the Dodecanese islands (“Twelve Islands”) of Greece, about 540 square miles or 1,400 square kilometers. About 117,000 people live on the island, about half in the capital city of Ródos at the northern tip of the island, surrounding the ancient and modern harbor there.

The ancient city is a UNESCO World Heritage Site.

Like almost all of the ports in this part of the world, Rhodes has gone through an encyclopedia of owners and antagonists.

There were inhabitants as far back as Neolithic times at the end of the Stone Age about 9000 BC, although we know little about them.

In 305 BC, Antigonus directed his son Demetrius to besiege Rhodes in an attempt to break its alliance with Egypt.

One year later Demetrius relented and signed a peace agreement, leaving behind a huge store of military equipment.

The Rhodians sold the equipment and used the money to erect a statue of their sun god, Helios: the statue we now call the Colossus of Rhodes. 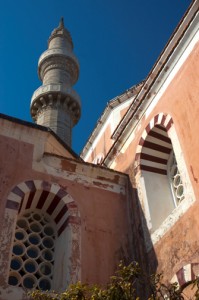 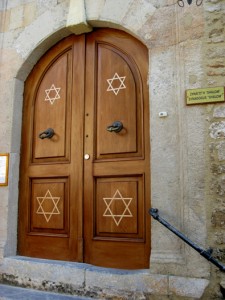 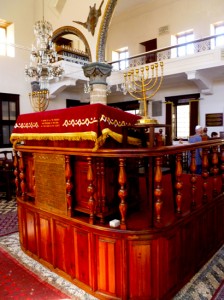 Mosques next to churches next to synagogues in Rhodes. Photos by Corey Sandler

On the east coast of Rhodes, about 35 miles or 55 kilometers south of the city of Rhodes, is the town of Lindos.

It is known for many things: its fine beaches, large bay, and the small resort of Haraki.

It exists, though, because of the acropolis of Lindos, a natural citadel which was fortified successively by the Greeks, Romans, Byzantines, the Knights of Saint John and the Ottomans.

That mix of one civilization on top of another makes it difficult for archaeologists to fully understand the site.

Lindos was founded about the 10th century BC by the Dorians. The location of Rhodes in the east made it a natural meeting place between the Greeks and the Phoenicians, and by the 8th century BC, Lindos was a major trading center.

Its importance declined after the foundation of the city of Rhodes in the late 5th century BC.

The massive temple of Athena Lindia reached its final form around 300 BC. 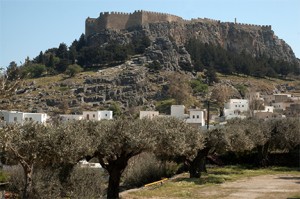 By early medieval times the buildings fell into disuse, and in the 14th century they were partly overlaid by a massive fortress built on the acropolis by the Knights of Saint John to defend the island against the Ottomans. 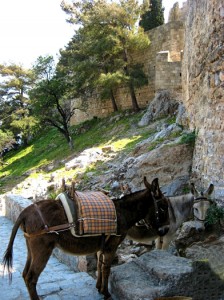 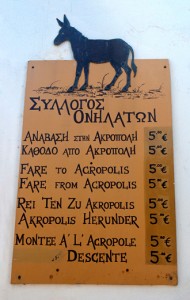 It’s a bit of a hike up the hill to Lindos. If you prefer, you can sit on your…donkey. At right, the taxi rates on a recent visit. Photos by Corey Sandler