Our first call in the small country of Uruguay (the second-smallest nation of South America, behind only Suriname) was at the resort community of Punta del Este, at the outlet of the Rio de la Plata. It is a place of affluence, with fine hotels and restaurants and beaches. . . and somewhat easy to mistake for other resorts in other places.

Here are some photos I took on a superb late spring day in Punta del Este, including a visit to its famous La Mano, which emerges from the sand on one side of the peninsula. The sculpture was made by the Chilean artist Chilean artist Mario Irarrázabal. 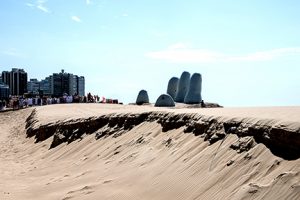 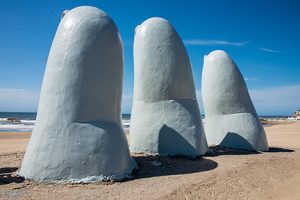 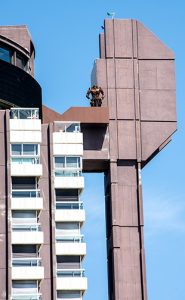 Our second port of call, at the capital city of Montevideo, was to a place of great distinction and energy. Except in the late afternoon.

Uruguay is hardly the only place in the world where nearly everything comes to a halt for teatime.

Here they call it merienda (snack) and it usually takes place about 5 in the afternoon, forestalling dinner until late in the evening, way past my ordinary bedtime.

But they do take merienda and tea seriously, and there are few places in the world where you’ll likely see more people walking around with mugs—often ceramic or china versions of gourds.

The tea they prefer is yerba mate, herbal tea.

As you travel in Montevideo or other parts of Uruguay, you see people walking the streets carrying the mate and a termo (thermal vacuum flask) in their arms.

You can also find hot water stations to refill the termo while on the road.

Montevideo today is a handsome, tree-lined city with a large collection of handsome buildings, many of them from the late 1920s and early 1930s.

One of the signature structures is Palacio Salvo, ljust off the Plaza Independencia and at the base of the main commercial street, 18 de Julio Avenue.

It was designed by architect Mario Palanti, an Italian immigrant living in Buenos Aires, and he used a similar design for his Palacio Barolo there.

Palacio Salvo was for a while the tallest skyscraper in South America, standing 100 meters or 330 feet tall with its original radio antennas. It is a handsome structure, with broad shoulders up high. And it sets the tone for many other buildings up the road. 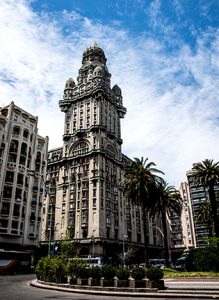 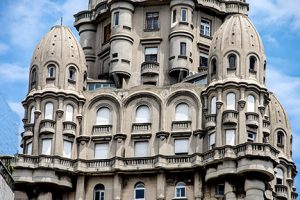 Here’s a bit more of Montevideo: 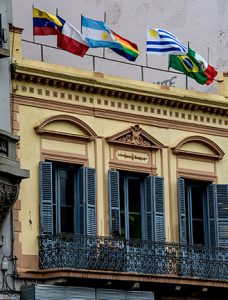 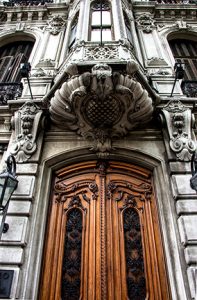 And on the commercial street is a modern feature, the Fuente de los Candados, the Fountain of Locks. Lovers who enscribe their names and other information and attach locks to the fountain are said to be guaranteed success in their personal attachment. Whether it is a true tie that binds remains to be seen. 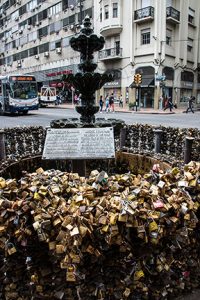 And then just outside the gate of the dock where Silver Muse is at rest today is a small park of maritime artifacts. Among them is the anchor of the German pocket battleship Graf Spee. That ship was damaged in a battle with British naval vessels near Punta del Este in 1939. The Graf Spee sought shelter in neutral Uruguay, but was forced to leave port within 72 hours and her commander chose to scuttle the ship in the River Plate rather than surrender her to the Allies. 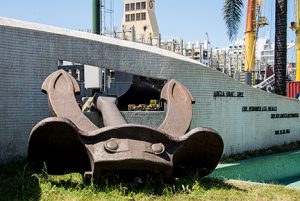 The Anchor of the Graf Spee in Montevideo, Photo by Corey Sandler

It certainly is on the east coast of South America, but devoted readers of this blog may have noted a pattern in recent weeks in which we seem to regularly find the extremes of geography in this part of the world.

So here’s an answer that might be worth some points at Team Trivia:

Montevideo is the southernmost capital city in the Americas.

Buenos Aires, Argentina is about 17 minutes of Latitude or about 121 miles north. And Chile’s capital of Santiago is further north.

Stanley, the capital of the Falklands Islands, is definitely further south, but the Falklands are a British Overseas Territory and not an independent nation.

IT NEVER SNOWS IN MONTEVIDEO

Okay, so according to the weather records it almost never snows in the mostly sultry city of Montevideo. Just a dusting once a decade or so, but a major local event nevertheless.

But as Silver Muse was preparing to sail away for Buenos Aires, a heavy thunderstorm appeared over the city. The captain decided to delay our departure about an hour to let it past.

We, being hardy New Englanders, decided to dine outside around the pool.

First came the wind, then the rain, and then for a minute or so came hail. It was a sight to see, and then it was gone.