We have moved east to a place of great reputation not often visited: the Faroe Islands and its capital and principal settlement, Tórshavn.

It would seem perfectly reasonable to pronounce the name of this place as if it were “Tor’s Haven”, which is what it essentially means.

Thor, as in the Norse god with the hammer. The god of thunder and lightning, also responsible for storms, oak trees, strength, fertility, and more.

The Faroe archipelago consists of 18 islands and islets of varying size about midway between Iceland and Norway. Ove the past 14 centuries or so, they have come under the influence of Irish and Scots, Nordic people including the Vikings, Denmark and Norway, and the Brits.

Not much grows here on these isolated rocks. There are not many people, and even fewer trees.

On our visit today, we sailed in through pea soup fog which as the day went on somehow became thicker. But it added a great deal of sense of place to this unusual set of islands.

Here’s some of what we saw through the mist: 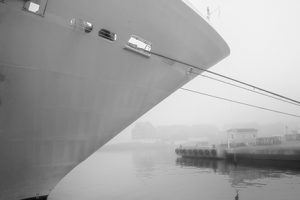 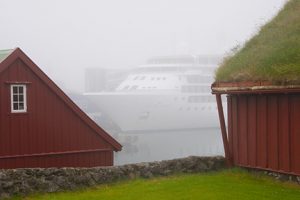 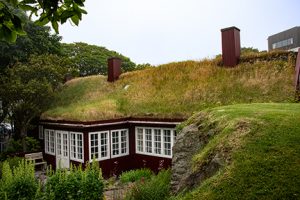 I also went for a visit to the very impressive historical museum just outside of town and saw some ancient artifacts as well as some of the evidence of the whaling and fishing history of the islands. 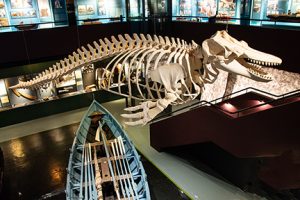 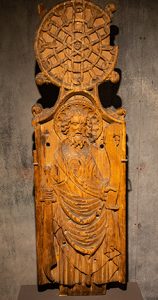 All photos by Corey Sandler, 2018. All rights reserved.

As was the case with Iceland, the first settlers here were believed to be Irish monks who did not persist, or procreate. They were followed by Vikings about the year 800.

Again, like Iceland, the Faroe Islands were occupied by the British during World War II and did suffer the occasional attack by German aircraft although a full-scale assault was never attempted,

At Torshavn Cathedral you will find a plaque installed by British war veterans thanking the Faroese people for their kindness during the occupation, which began in 1940 and ended in 1945.

Apparently the kindness was pretty significant; about 170 marriages took place between British soldiers and women from the Faroes.

The last British soldiers left in September 1945, and the Faroese did not want to go back to their previous status as a colony of Denmark. A referendum on independence was held in 1946, and in 1948 autonomy was granted, within the Danish realm.

After all these years, though, the Faroese still love fish and chips as well as British chocolate such as Cadbury Dairy Milk.