We are back in Alta once again, the northernmost port of call on this cruise in search for the Northern Lights.

Altafjord at Alta when clouds cleared on Tuesday.

We knew this already, but we received reinforcement in our understanding of the fact that the search can sometimes be quite difficult. A week ago, they danced and shimmered and moved against a clear back sky. Last night, the sky was nearly completely covered with clouds, but three hours of waiting at the ski resort at Storsandnes finally revealed a teasing reminder.

The next morning, groggy from a long night out on the search, we went into the city of Alta.

The Northern Lights Cathedral in Alta, a decidedly modern structure, is meant to evoke the spiral of the Aurora Borealis.

Within the Northern Lights Cathedral in Alta.

In the Sentrum of the city, a winter festival featured handsome ice and snow sculptures; the rest of Norway is much the same.

To send me an email or to inquire about copies of photos, please click here: www.coreysandler.com/contact-me/

After our second day in Alta, we departed our northernmost port and headed through Altafjord to the open ocean. In the early evening we sailed nder the bridge and along the waterfront of Tromsø before turning south  to run down the coast to our ultimate destination of Bergen.

Overnight we sailed around the corner and half a degree further north to Alta, at 69 degrees 97 minutes North.

It’s an isolated, cold place and the skies are gray this morning but we’re hoping for clearing and more shots of the Northern Lights near midnight.

After dark I went with a group of guests north and west from Alta to Langfjordbotn, a tiny community at the end of an arm of the Altafjord.

An historical note: it was here that the German battle cruiser Scharnhorst hid from about 1941 to 1943 before sallying out for the Battle of the North Cape where she was eventually sunk.

Closer to Alta, at Kafjord, was the penultimate hiding place of the battleship Tirpitz, which was Winston Churchill’s northern obsession. The Tirpitz was bombed and seriously damaged near Alta, but managed to escape to another hiding place near Tromsø where she was eventually sunk.

Alta was heavily clouded all day, but our drive to Langfjordbotn brought us to a mostly clear place and there we waited for the appearance of the Northern Lights. When they arrived, they were very different from what we had seen earlier in the cruise: here they shimmered and waved like a multicolored curtain.

If you have ever wondered why so many cultures of the far north (including China, Japan, Russia, and Scandinavia) include dragons, look at the fourth image in the following series.

Here are a few photos I took. All photos by Corey Sandler, all rights reserved 2019. If you would like a copy, or like to use an image, please contact me.

We crossed over the top of Norway yesterday, and as we reached 71 degrees North we sailed into a chilly summer fog bank near the top of Europe at North Cape.

The Silver Cloud is fully equipped with radar and radio and GPS and all of the other modern navigational devices.

But our captain also turned on the fog horn, and its deep bass blast rumbled out in front of us.

I couldn’t help but think of the conditions under which the North Atlantic Convoys had been forced to travel between 1941 and 1945: in radio silence, blizzard and ice storm, polar darkness or (most dangerously) Midnight Sun…all the while nervously on watch for German U-boats, aircraft, and surface ships.

I’ve written about this in previous blogs: although the German battleship Tirpitz never engaged in open-sea fighting, she nevertheless had a major impact on the planning and operations of the convoys.

British, Canadian, and American convoys were in constant fear that the Tirpitz would emerge, and so they had to sail away from the Norwegian coast…and into the path of U-boat wolf packs.

Its presence—if not its use—diverted the efforts of dozens of Allied ships, thousands of Allied airmen, and became a five-year obsession of British Prime Minister Winston Churchill. 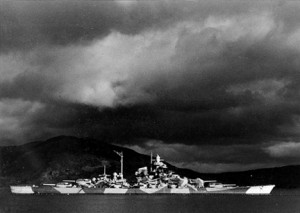 The Tirpitz in her lair in Kåfjord. (Historical photo)

The British had unsuccessfully attempted to destroy Tirpitz while it was under construction in Germany.

They were not able to mount a major air assault early in the war.

But another plan was hatched: the X-Craft.

Three of the four X-Craft actually made it to Norway and two got through the submarine nets to come beneath Tirpitz.

Their mines exploded, causing major damage to the Tirpitz, but she was only partially repaired. 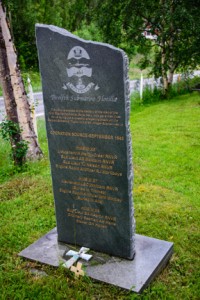 hen the British sent aircraft: at first from carriers offshore and then from a base in Murmansk in northern Russia. It was from there that one huge “Tall Boy” bomb miraculously found its target through the smoke screen laid down by the Germans.

The crippled Tirpitz was moved to Håkøybotn, a cove west of Tromsø, and there she was finally destroyed on November 12, 1944.

On our way up the coast from the start of this voyage in Copenhagen, we had visited Tromsø. And then later we sailed to Murmansk and Arkhangelsk, the two ports used by the Soviets to receive aid from the Allies during the war.

Today I went with a group of guests to visit the place where the Tirpitz had hidden for most of the war, and where she was repeatedly attacked by British naval and air forces.

Kåfjord is at the dead-end to the long and winding Altafjord that leads out to the sea.

We visited a small, private collection of artifacts from the German occupation and a few pieces of the Tirpitz. That was not the most impressive part of the visit. 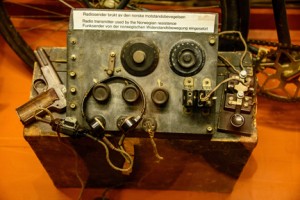 Instead, it was the view of Kåfjord itself that will stick in my mind:  It’s a typically pretty piece of Norway, with only a few small markers to remind you of the terrible threat that lurked here for nearly four years in the war. 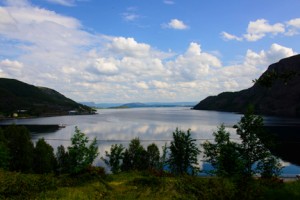 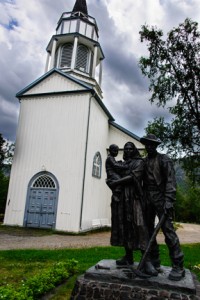 The Kåfjord Church, one of the few old buildings to survive the German occupation. Today it includes a memorial to British submariners as well as to local copper miners who died in the mountside mines

But to most historians, it was the successful Atlantic Convoys to the Soviet Union that allowed the Russians to hold off and eventually push back the Germans and mark the beginning of the end of World War II.

That effort came at a huge cost in lives and treasure, much of it because of the ghost ship that once lived here.

All text and photos Copyright 2013, Corey Sandler. If you would like a copy of any photo, please contact me through the Obtain a Photo tab of this blog.