Devil’s Island, L’île du Diable, is one of the most evocative, terrifying, inspiring, and memorable places I know of.

To be precise,  Devil’s Island is one of three islands that make up Les Isles du Salut, the Salvation Islands.  And those three were in turn part of the vast prison complex established by the French in their colony of Guiana off the southeastern coast odds of South America. As a whole,  the complex was known by its most evocative island name,  Devil’s Island.

You do not visit Devil’s Island without some of it staying with you the rest of your life.

The good news, of course, is that we are sailed in on one of the most luxurious cruise ships in the world. And the even better news is that we sailed away in the early evening, just in time for drinks at the Bar and a five-star dinner. 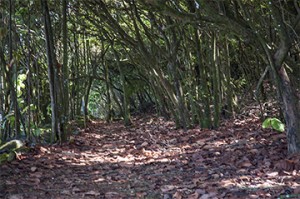 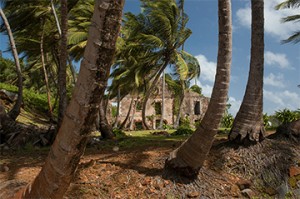 It was not at all like that for the 70,000 or so guests who checked in to Devil’s Island between 1852 and 1953. Devil’s Island and the two nearby islands as well as the mainland of French Guiana was used by the French as a penal colony for 101 years.

It was a hot, humid, disease-ridden, outpost of hell.

The vast majority of the prisoners sent to the Devil’s Island prison system never made it back to France. Many died due of disease and harsh conditions. Sanitary systems were limited, and the region was mosquito-infested, with endemic tropical diseases. Only a few convicts ever successfully escaped, and most of them were captured on the mainland.

Devil’s Island is the third-largest of the ironically named Îles du Salut (Islands of Salvation). To be precise, we came ashore at the Ile Royale, which was part of the prison complex. On the far side of Royale is a view across a narrow strait to Devil’s Island. 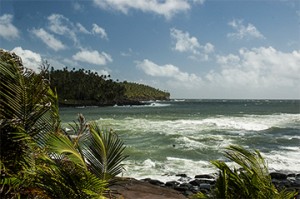 It is not considered wise to swim in the rough currents between Royale and Devil’s Island. Not so much the currents; the sharks.

It’s a rather foreboding place, with not much to recommend it unless you like to see marauding bands of super-sized rodents, large monkeys, and killer sharks patrolling close to shore.

The reason we visit is to immerse ourselves in the history of the place.

The penal colony was not a secret. In 1895, French army captain Alfred Dreyfus was unjustly convicted of treason and sent to Devil’s Island in 1895. The French author Emile Zola helped bring about a retrial of Dreyfus, and eventually he was exonerated.

In 1938 the penal system was strongly criticized in Rene Belbenoit’s book Dry Guillotine. Shortly after the release of Belbenoit’s book, the French government announced plans to close the bagne de Cayennes. The prisons were kept open during World War II, but from 1946 until 1953, one by one the prisons were closed. The Devil’s Island facility was the last to be closed. 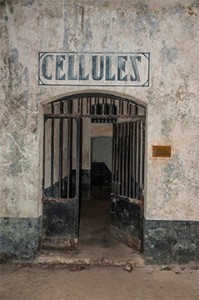 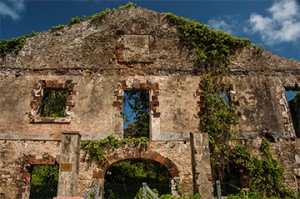 And then in 1970 came the book Papillon, published as a memoir by a former prisoner, Henri Charrière who had a tattoo of a butterfly, a papillon, on his chest. Charriere’s book was an international bestseller, and in 1973 the film Papillon, starring Steve McQueen and Dustin Hoffman made the story part of the global cultural DNA. Charrière said that all events in the book were truthful and accurate, allowing for minor lapses in memory.

A few hours walk around the island leads to this conclusion: close enough, and let’s be on our way. 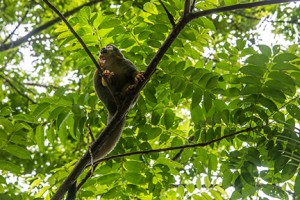 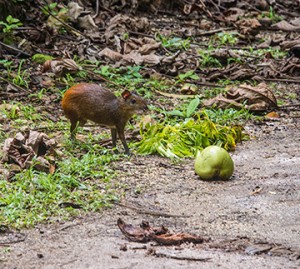 Monkeys on high, cat-sized agouti down low. Neither were much bothered by our presence. 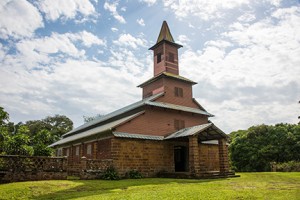 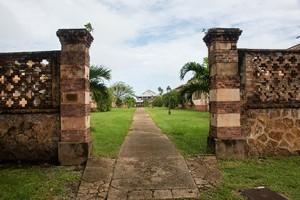 The church,  one of the few places of relative “liberty” for the prisoners. And a section of the housing for the guards, very different from the cells for the inmates. 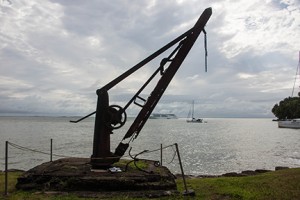 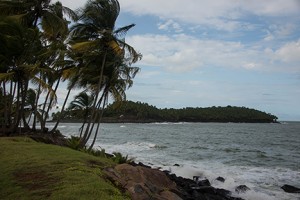 We are headed now for the Amazon River. My next blog post will come on Sunday, 1 February from Santarem.

All photos copyright by Corey Sandler, all rights reserved. If you would like to purchase a high-resolution copy of an image please contact me.