First of all, the island we visited is pronounced GREN-ayda.

GRAN-ahda is the city in Spain.

But according to some, both city names have as their root the Spanish word for Pomegranate, which in turn may have come from the Arabic.

The island was sighted by Christopher Columbus on Aug, 15, 1498, and he called it something else: Concepción. At some point after Columbus, Spanish explorers in the Caribbean renamed the island in honor of the great Spanish city of Granada.

And then over time, the pronunciation changed.

And just to make complete the circle of confusion here, although the Spanish did introduce pomegranates in the new world, that happened in the mid-18th century…and not on the island of Grenada.

The British, another great colonial power in the region, introduced a different plant: stealthily imported nutmeg trees from the Banda Islands of Indonesia.

So, no pomegranates in Grenada. But lots and lots of nutmeg.

Grenada is an independent nation consisting of the main island of Grenada and six smaller islands at the southern end of the Grenadines in the southeastern Caribbean Sea.

The island is just 133 square miles or 344 square kilometres, and the estimated population is about 110,000.

Grenada is very lush and green, in a semitropical climate with rich volcanic soil; many types of fruits, vegetables, and spices grow on the island: cinnamon, cloves, ginger, allspice among them.

But the singular spice that is one of Grenada’s signature products is Nutmeg.

Did I say, “singular?” Once again, things are a little unusual here.

Nutmeg is one of two spices derived from the Myristica genus of evergreen trees. The same tree, actually the same fruit, also yields another spice, called mace.

The nutmeg is the egg-shaped seed of the tree, about an inch long and half an inch wide. Mace is the lacy reddish covering or aril of the seed.

All this talk about nutmeg is for good reason: at one point, nutmeg was an especially valuable spice, the source of great conflict between Arab traders who knew the secret source in Indonesia and western buyers who craved it very much.

Today, about 20 percent of the world’s nutmeg comes from Grenada, and 75 percent from Indonesia.

The food and the culture and the way of life in Grenada is appropriately spicy, with more than a bit of Jab Jab, a local version of voodoo centered around a menacing she-devil. I shall end my blog without further comment; don’t want to get on the wrong side of La Diablesse. 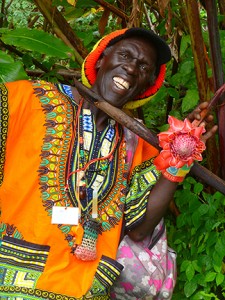 Our guide, Dean, with one of the amazing flowers of the rainforest of Grenada. 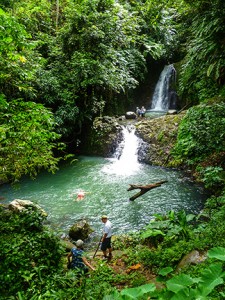 The Seven Sisters Waterfalls, the end of a muddy, difficult hike. It was very much worth the effort, although my knees will ache tonight.

All photos copyright by Corey Sandler, all rights reserved. If you would like to purchase a high-resolution copy of an image, please contact me.