Haifa is a mostly modern city with an ancient back story. Built on the green slopes of Mount Carmel, it has a waterfront with beautiful sandy beaches, and some of the best restaurants in Israel, a place where people very much enjoy their food. 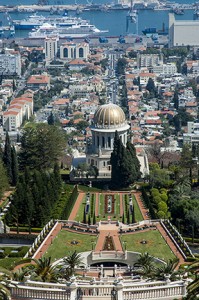 From near the top of Mount Carmel, looking down through the Baha’i gardens to the port. Photo by Corey Sandler

The earliest known settlement in the vicinity was Tell Abu Hawam, a small port city established in the Late Bronze Age of the 14th century BC. Over the centuries, the city was conquered and ruled by Phoenicians, Hebrews, Persians, Hasmoneans (the Kingdom of Judah), Romans, Byzantines, Arabs, Crusaders, Ottomans, the British, and the Israelis.

In the 9th century, after the Arab conquest of Palestine, Haifa established trading relations with Egyptian ports. Prosperity ended in 1100, when Haifa was besieged and blockaded by the Crusaders and then conquered after a fierce battle between the Crusaders and the Jewish and Muslim inhabitants. For the next 700 years, the small town went back and forth between Islamic and Crusader rule, eventually part of the Ottoman Empire from about 1596. With a few gaps, including a failed expedition by Napoleon, the town remained under Ottoman rule until 1918.

In 1909 Haifa became central to the Bahá’í Faith, when the remains of their prophet, the Báb, were moved to Acre and a shrine built on Mount Carmel. The Bahá’í Faith is a monotheistic religion founded in 19th century Persia. There are an estimated five million Bahá’ís in more than 200 countries.

In the Bahá’í Faith, religious history is seen to have unfolded through a series of divine messengers, each of whom established a religion that was suited to the needs of the time. These messengers have included Abraham, the Buddha, Jesus, Muhammad and others, and most recently the Báb and Bahá’u’lláh. In Bahá’í belief, each messenger prophesied of messengers to follow.

Humanity is understood to be in a process of collective evolution, with the goal of peace, justice and unity on a global scale. The Bahá’í Shrine in Haifa is one of the focal points of the city, with its golden dome and beautifully landscaped gardens on 19 acres. A promenade with fountains leads from the top of Mount Carmel to the shrine and down to its base. 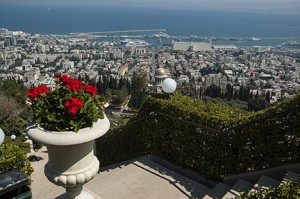 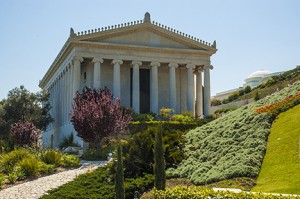 The Bahá’í Shrine is an extraordinary oasis in a special place. Photos by Corey Sandler

Haifa’s German Colony was established in 1869 by the Templar Society (not the same as the Knights Templars), whose members arrived from Germany with the goal of settling the Holy Land and preparing residents for the arrival of the Christian Messiah. The Templars founded seven colonies around the country.

In recent years the German Colony has been restored, turning it into one of Haifa’s liveliest and most attractive entertainment centers. The district is centered around Ben-Gurion Boulevard, above the port. 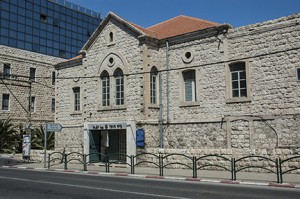 The German Colony is between the port and Mount Carmel. Photo by Corey Sandler

Acre, or Akko, about an hour north of central Haifa, was the main port of Palestine for the Arab caliphates in the 7th century. The port was captured in 1104 in the First Crusade by one of the more obscure figures of world history: King Baldwin I of Jerusalem. Baldwin was a Frenchman, born Baudouin de Boulogne.

Along with his brothers, he fought in Constantinople and then moved on to Jerusalem. He succeeded in taking Acre with the assistance of a Genoese fleet; it then became the most important port for the Crusaders.

After Acre was retaken by the Kurdish leader Saladin in 1187, there followed assaults by other European crusader forces including one from Pisa and then combinations of French, English, Swabian (Bavarian), and German armies. The Knights Hospitaller, which operated out of Rhodes and then Malta, took control in 1229. And then Acre went back to Egyptian control in 1291, falling again to the Ottomans in 1517.

On this visit we decided to spend the day in Acre, or Akko as it is also known. It was another chance to travel on time,  and also to experience some of the mix that is modern Israel.

The Old City of Acre today is mostly Arab and Muslim, within the Jewish state of Israel. It’s alleyways include mosques,  ancient synagogues,  and Crusader-era ChristIan churches. 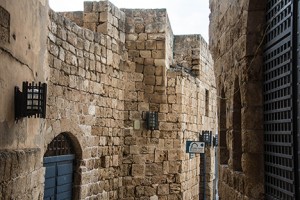 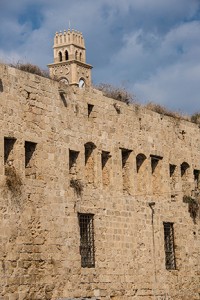 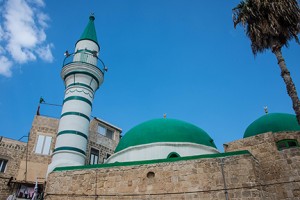 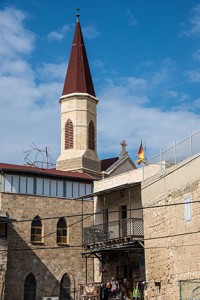 Nazareth—about 25 miles or 40 kilometers from Haifa—is considered by many Christians to be the childhood home of Jesus, who was born in Bethlehem near Jerusalem. Some scholars and sects, though, believe Jesus was born in Nazareth. Modern Nazareth is considered “the Arab capital of Israel.”