Kirkwall is the capital and largest settlement of Orkney, between the Shetland Islands above and the top of Scotland below.

Like the Shetland and Faroe islands, Iceland, and much of the far north, its recorded history begins with Norse settlers.

There are about 70 islands, 20 inhabited. The largest island is called Mainland or, confusingly, “The Mainland”, while the country that lies about 16 kilometers or 10 miles below is referred to as “Scotland.”

Some elements of Scotland, like tartan, clans, and bagpipes have made their way to the islands but they are not indigenous to the local culture.

The islands have been inhabited for at least 8500 years, originally by Mesolithic and Neolithic tribes and then by the Picts, believed to be a Celtic tribe that inhabited northern and eastern Scotland. A charred hazelnut shell recovered in 2007 in Tankerness on the Mainland has been dated to 6820–6660 BC.

The village of Skara Brae, Europe’s best-preserved Neolithic settlement, is believed to have been inhabited from around 3100 BCE. The Ring of Brodgar is a Neolithic henge or earthworks, a stone circle about six miles northeast of Stromness on the Mainland island in Orkney.

In the heart of Kirkwall is Saint Magnus Cathedral, dating back more than a thousand years and including elements of Catholic and Protestant elements with Viking and Nordic overtones.

The southern group of islands surrounds Scapa Flow, a place used for centuries as a safe naval roadstead or road, a sheltered stretch of water where ships could ride at anchor.

Scapa Flow was a Royal Navy base that played a major role in both World Wars. It was the staging point for the major sea battle of World War I, the Battle of Jutland at the end of May 1916.

After the Armistice in 1918, what remained of the German High Seas Fleet was brought to Scapa Flow while the Allies tried to decide how to parcel them out to the victors. On November 28, German sailors opened the sea-cocks and scuttled all the ships. Most of the ships were later salvaged, but the remaining wrecks are now regularly visited by divers.

As a result, it was decided to erect barriers across the gaps between some of the islands, limiting access to Scapa Flow to allow for better defense. They became known as Churchill Barriers. Four were built, with a total length of 1.5 miles or 2.4 kilometers, and they are still in use.

The barriers were partly constructed by 1,200 Italian prisoners of war who were brought from North Africa to Orkney during the war. One poignant side story of the POW camp was the construction of what is known as the Italian Chapel by the prisoners; it was built from scavenged military huts and bits and pieces of equipment and supplies.

All photos and text Copyright 2019 by Corey Sandler, all rights reserved. See more photos on my website at http://www.coreysandler.com﻿

IF YOU WOULD LIKE TO PURCHASE ANY PHOTO OR AN AUTOGRAPHED COPY OF ONE OF MY BOOKS, PLEASE CONTACT ME.

One last small island before we reach the large island that is Britain.

Kirkwall is the capital and largest settlement of Orkney, between the Shetland Islands above and the top of Scotland below.

Our port of call is on the northern coast of the island of Mainland Orkney, with a population of about 10,000.

I went with guests on a tour that included a visit to Scapa Flow, one of the most important pieces of water in the 20th century: the gathering polace of the British fleet in World War I for the Battle of Jutland off Denmark, and later the place where what remained of the German High Fleet was sequestered at the end of the war while the terms of the Treaty of Versailles was worked out. It was here that a German officer ordered the scuttling of about 75 of the ships to prevent them being distributed to the Allies as trophies of war. 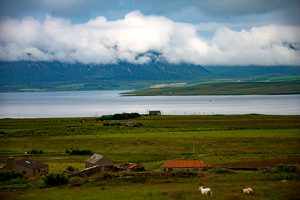 We also visited the quaint village of Stromness in time to see the arrival of the ferry from Scrabster on the mainland of Scotland. 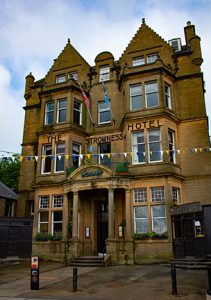 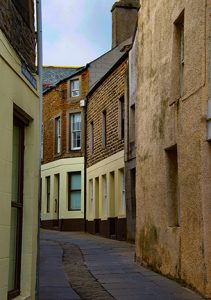 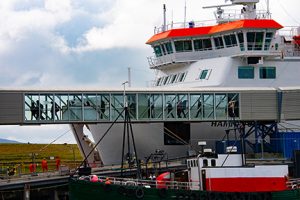 And then we visited the Ring of Brodgar, a 5,000-year-old henge or ring of stones. Its purpose is not fully known–perhaps religious, perhaps ceremonial, or perhaps a means of tracking the skies. 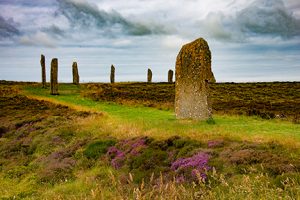 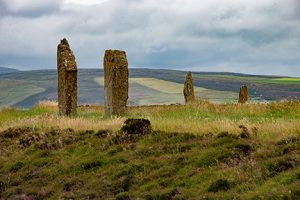 At the heart of the town of Kirkwall is Saint Magnus Cathedral, which was founded in memory of Saint Magnus Erlendsson, Earl of Orkney from 1108–1117.

Although the annexation of the earldom by Scotland took place more than five centuries ago in 1472, some locals will identify themselves as Orcadians first and Scots second.

The economy of Orkney is today based on agriculture and fishing, with a growing tourism sector. After a major investment, the town pier has become a lure for cruise ships, and about 85 calls per year are made.

There are about 70 Orkney islands, of which 20 are inhabited.

The largest island is called Mainland or, confusingly, “The Mainland”, while the country that lies below is referred to as “Scotland.”

Mainland is 523 square kilometers or 202 square miles, making it the sixth-largest Scottish island and the tenth-largest island in the British Isles.

All photos and text by Corey Sandler, Copyright 2018. All rights reserved.