On the pedestrian bridge that leads from the harbor where Silver Whisper was docked, the railing is festooned with hundreds of brass locks.

It’s not something you see every day…unless you travel a lot in Western Europe, where it has taken hold as a form of declaration of romantic entanglement. They call them “love locks.”

Here’s the idea: Hans and Angela decide to go steady. To signify their commitment, they head to the hardware store and buy a padlock. 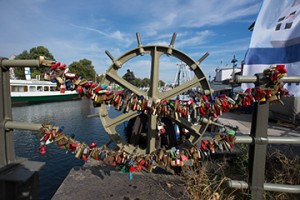 They write their names on the lock with a pen, or go the extra yard and enscribe them with a power tool. The lock is brought to the bridge and attached…and then the key is tossed into the water below.

And if love turns out to be less than permanent, I suppose one or the other returns to the bridge with a lock-cutter to remove the evidence.

We’ve seen these love locks in many places, most notable on the famous Accademia bridge in Venice. Sometimes the bridges end up bearing so many locked-up declarations that the authorities have to come in and remove them to prevent the bridge from falling down.

Warnemunde is a quirky, attractive little seaside resort in what was for four decades part of East Germany. 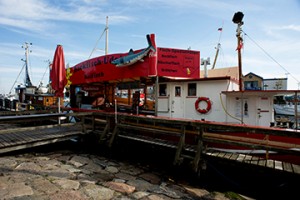 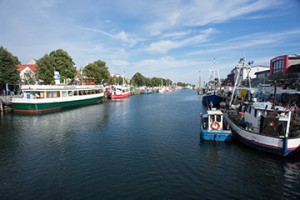 It was mostly spared from Allied bombing raids in World War II.  Across the Warne river, Rostock was all but leveled because of its many aircraft factories and shipyards.

And so in Rostock, you are able to see some interesting iconoclastic pieces of architecture.

There are hundreds of little seaside cottages in various German, Bavarian, and even Alpine designs. There are several distinctive Bauhaus-style structures, boxy buildings that place function over form.

And then there are the remnants of the quite unimaginative East German authorities: more than a few dreary Soviet-style apartment blocks and the Teepott, a large restaurant and conference center more-or-less shaped like a teapot. 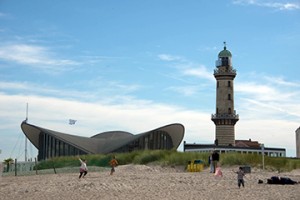 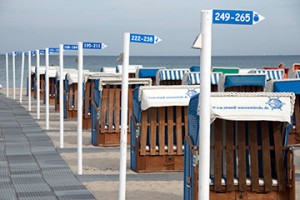 For us, the best part of our visit on a sleepy Sunday at the end of summer was the discovery that one end of the beach had been taken over by a kite club. They were flying objects of just about every description: dragons, snakes, twirling boxes, and best of all a large whale that rose and sank in the sky above the waves. 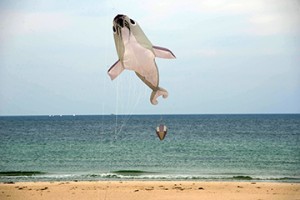 All photos Copyright 2013, Corey Sandler. If you’d like a copy of any photo, please send me an email through the contact box on this page.

The last time we visited Amsterdam, a few months ago, we made a beeline for the reopened Rijksmuseum, newly emerged from a ten-year makeover as one of the most spectacular art museums in the world. You can read about that visit in an earlier entry in this blog.

This time we had cheese on our minds.

We walked from our ship toward the floating flower market of Amsterdam and I began my day focusing on tulips and other wondrous blooms. The colors seem to be painted using a palette not found in nature: the artist Van Gogh, the centerpiece of another great museum in Amsterdam, made more than a few studies of flowers.

Later in the day, with an hour or so to spare, I devoted myself to learning a few new tricks in Adobe Photoshop: I converted a photo to black and then hand-selected a few blooms to pop through in full color. 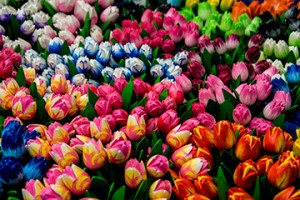 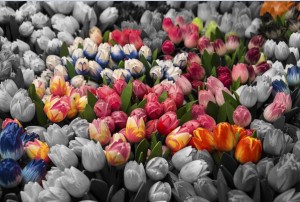 Flowers, As Arranged by Corey Sandler

But I mentioned a hunt for cheese. Growing up in New York City in the 1950s, I fondly remember neighborhood specialty food shops including cheese stores. My favorite was Kimmel Muenster, a form of slightly sweet muenster cheese laced with pungent caraway seeds.

As supermarkets and big box stores took over the sale of nearly everything, Kummel Muenster disappeared along with the specialty stores. I have spent decades trying to recapture that flavor.

Silversea corporate chef David Bilsland—you can read a bit more about him in earlier postings of this blog—had put me on to a possible substitute: cheese with comino seeds. And so that was our quest: comino cheese.

Across from the flower market was our target: a row of stores selling many varieties of Dutch gouda and other cheeses. And there, hidden in plain sight, were rounds of komijn kaas: comino cheese. 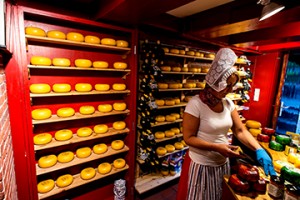 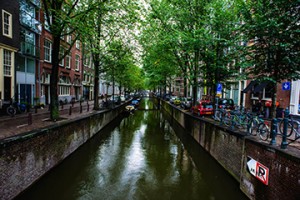 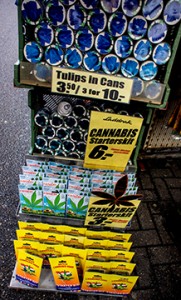 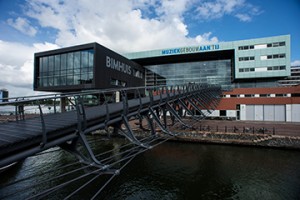 Gouda is not quite muenster, and comino is not exactly caraway. But after all these years, it was close enough for a celebration. We’ve got the evidence in the refrigerator in our suite.

In other news, there’s a new King in town: 28-year-old King Willem-Alexander took the throne on April 30 of this year.

This followed the abdication of his mother Queen Beatrix, who in retirement has taken the name Her Royal Highness Princess Beatrix.

Oh, and the Argentinian-born wife of Willem-Alexander is now Queen Máxima, although that is a title without office in the parliamentary nation of the Netherlands.

A PILOT TAKES TO THE SKIES

The weather in the North Sea and the English Channel can be rough this time of year, and we were reminded of that when we left Amsterdam and headed for what was supposed to be the last port of call on our cruise, at Zeebrugge in Belgium.

Amsterdam, like most of The Netherlands, lies at or below sea level and so its harbor is protected by locks that help prevent high or low tides from affecting commerce and property.

As soon as we cleared the lock out of Amsterdam, we came head-on into a fierce storm.

My wife and I are pretty rugged seafarers and so we had already dined and were fast asleep when a bit of excitement took place on the top deck of Silver Whisper.

Because of the rough conditions, the pilot we had taken on board in Amsterdam was unable to get off our ship to the small boat that had been sent to bring him home. And so a helicopter was brought out, and the pilot was winched up from the pool deck.

We slept through it all.

The next morning came the other shoe: it was too rough to take on a new pilot for the approach to Zeebrugge, and so we were forced to miss that port call. Instead, we crossed the English Channel and pulled into Southampton that evening to spend a peaceful night tied up at the dock.

Warnemünde, the beach resort at the mouth of the Warnow River, like much of this part of Europe, has risen and fallen with the tides of war and economic upheaval.

Rostock would rise to great importance as one of the ports of the Hanseatic League.

And then it would become the home of some of the industrial might of Nazi Germany, including a major aircraft factory and port. Heinkel and Arado Flugzeugwerke grew out of the earlier aviation factories in the area.The Arado Ar 66 became one of the standard Luftwaffe trainers.

The firm also produced some of the Luftwaffe’s first fighter aircraft. Near the end of the war, Arado came up with the Ar-234, the first jet-powered bomber. Only a small number of the single-seat twin-engine plane were built, which was a good thing.

In their few sorties as bombers they proved to be nearly impossible to intercept. Not that they would have altered the outcome of the war, but they might have delayed its conclusion.

The jet, nicknamed Blitz or Lightning, was the last Luftwaffe plane to fly over England, in April 1945.

Until their liberation in April 1945 by the Soviet army, 1,012 slave laborers from Freiburg, a sub-camp of the Flossenbürg concentration camp in Bavaria, worked at the Arado factory.

That made it a major target of Allied bombing, and it was seriously damaged in the war.

The attacks on Rostock, and more importantly the historic Hanseatic city of Lübeck not far away, enraged Hitler—if such a thing was possible and led in April 1942 to a series of German raids on historic cities in Britain beginning with Exeter and continuing to Bath, Norwich, York, and later Canterbury.

The bombings became known as the Baedeker raids because the Germans supposedly chose them by thumbing through a Baedeker travel guide book about England.

Following that, the Soviets swept in…stealing what they could and then bringing the drab grayness that landed throughout East Germany. 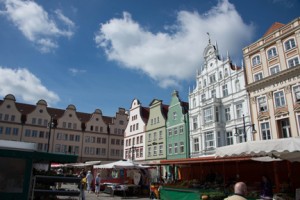 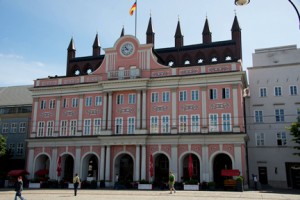 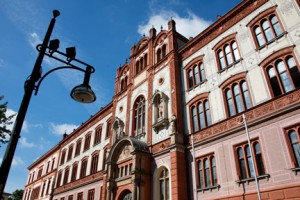 Warnemünde’s broad, sandy beaches are the largest on the German Baltic Sea coast, stretching about three kilometers or two miles.

It also has some pretty beachside homes, and all of the basic elements of a seaside resort including a promenade, outdoor restaurants, and tourist attractions.

There are three notable sights in Warnemünde:

Undressed bodies on the beach—some of whom you might wish would put on winter clothing or otherwise make themselves less apparent.

An historic lighthouse near the beach promenade, built in 1897.

And the Teepott, the nickname for one of the resorts most famous landmarks. It was built in the 1960s and is an appropriately odd example of East German architecture.

Today the Teepott holds a few restaurants and an exhibition hall. 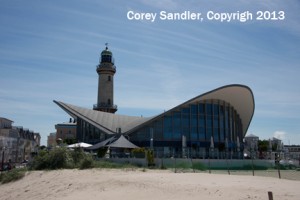 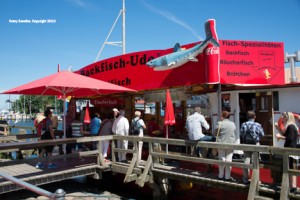 Among the many to invade this area in earlier times were the French under Napoleon, who occupied the town for about a decade until 1813.

Von Blücher, who rose to the level of Prussian Generalfeldmarschall (field marshal) would live to fight another day, leading his army against Napoleon at the Battle of the Nations at Leipzig in 1813 and at the Battle of Waterloo in 1815 with the Duke of Wellington. 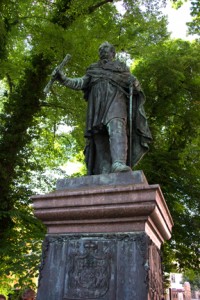 Any Mel Brooks fans out there? There have to be.

In the film Young Frankenstein, the great actress Cloris Leachman, a household servant in the home of Doctor Frankenstein…or should I say, Franken-steen.

Brooks never explained the joke, but everytime Frau Blucher appeared on screen we would hear the whinney of the Marshal’s horse. 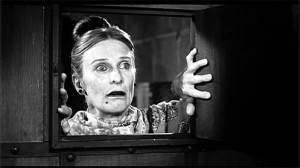 Saint Mary’s Church Marienkirche, on Ziegenmarkt, is an imposing Brick Gothic structure that was first built in the 13th century.

Behind the high altar on the apse is an astronomical clock built in 1472 by a Nuremberg clockmaker.

It is the only Medieval clock of its kind still in working condition with its original clockworks.

The clock has three sections.

Every hour, the apostles circle around Jesus for a blessing; the last, Judas, is shut out by a clanging door. 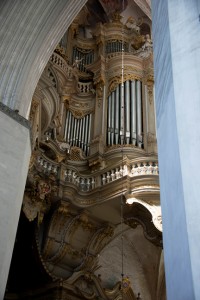 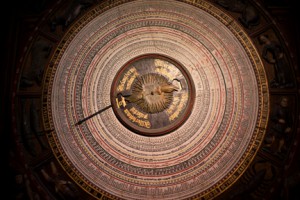 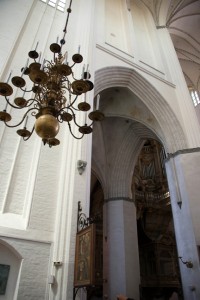 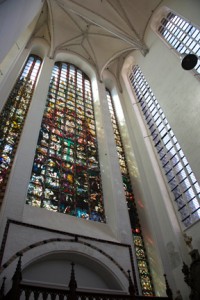