Over two millennia, Talinn has had its ups and downs. It still does. Its ancient center is the city on the hill. [whohit]-Tallinn 8July-[/whohit]

But more to the point: in the 800 or so years, Estonia has had only about 40 years of independence.

And 20 of those years have come in the last two decades. 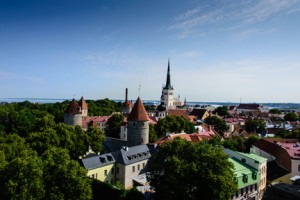 Ancient Estonia was first settled about 3,000 BC mostly by Finnish, Estonian, Karelian, and Ugric-Hungarian tribes from the east.

But Tallinn as we see it now: winding cobblestone streets and rough stone buildings date mostly from the 11th to 15th centuries.

Estonia’s golden era was between the early 15th and mid 16th centuries when it was a member of the Hanseatic League in the Baltic.

Being an important trading center had advantages and disadvantages: there were great riches and culture, but also the need to defend against enemies.

And so, over the centuries it has been assaulted, occupied, liberated, and reoccupied by: Vandals, Crusaders, Danes, early Germans, Swedes, Russians, and Lithuanians. And then in the 20th century by the Soviets,  Nazi Germany, the Soviet Union again, modern Russia. 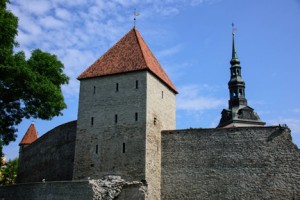 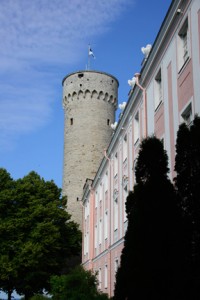 Peter the Great of Russia annexed Estonia in 1710 and began making visits.

In 1713 he purchased the land for Kadriorg Palace and an already antique 17th-century cottage nearby. The house, with a kitchen and four rooms, is pretty much the way it was when Peter used it. It includes a small dining room with an extra-tall chair for the Czar.

Peter was about six-foot eight-inches tall, huge for the time. But just for good measure, Peter sometimes traveled with dwarves to accentuate his size. 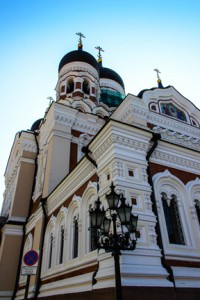 Alexander Nevsky Cathedral, a Russian Orthodox church on the hill

The Estonians were under the thumb of so many invaders, but to their credit the people were constantly looking for a way to push through a sprout of freedom.

In the 19th Century came a period called the National Awakening, spread by the evils that come with schools, literacy, books, and newspapers.

Taking advantage of the chaos in Russia caused by World War I and the Bolshevik Revolution, Estonia declared independence on February 24, 1918.

That did not last long.

Within days, Germany took over.

And then in November of the same year, Germany capitulated and the Soviets moved back in.

In the Tartu Peace Treaty, signed February 2, 1920, Soviet Russia renounced claims to Estonia and Finland “for all time.”

Good luck with that.

In 1921 the Republic of Estonia was accepted into the League of Nations.

But as war again raged across Europe in 1939, Hitler and Stalin engineered the Molotov-Ribbentropp Pact, a treaty that carved spheres of influence between Germany and the Soviet Union.

On June 16, 1940, Stalin accused the Baltic states of aggression and demanded the right to occupy them. And then the Soviets came back to take hold.

The peace between Hitler and Stalin ended abruptly on June 22, 1941 when Germany invaded Russia and its occupied states.Germany occupied Estonia for three years.

By September 1944 the Germans retreated.And so Estonia declared itself an independent Republic once again on September 18.

Estonia would not regain its independence for fifty years, a mostly unwilling member of the USSR until 1991.Life in Estonia took on the repressive, bureaucratic culture of much of the rest of the Soviet Union.

On February 24, 1977 a small act of rebellion: the blue-black-white Estonian flag was briefly raised in Tartu to mark the 59th anniversary of the first Estonian Republic.

The Song Grounds in Kadriorg, completed in 1960, was considered an achievement in Modernism.

Meant to celebrate all things Soviet, the song festivals held here in the 1980s became an important part of Estonia’s independence movement, the Singing Revolution.

In June 1988, more than a hundred thousand people packed the Song Festival Grounds. 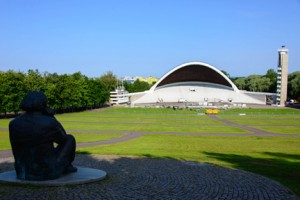 The Song Festival Grounds in Tallinn

A few months later the crowd was three hundred thousand and they heard the first public demand for independence.

On August 23, 1989 some two million people joined hands along the 600 kilometer road between Tallinn and Vilnius. 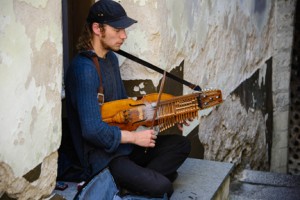 A musician places a modern recreation of a medieval lute. The instrument combines a bit of the lute and a viola. It does not have a modern name in Estonia: think of it as a violut.

In November 1999, Estonia joined the World Trade Organization. Membership in NATO and the European Union followed in 2004. In January of 2011, Estonia made the switch to the Euro, and that is now the official currency.

An Estonian told me, “Some people ask why we would sign on to the sinking Titanic with the Euro.

“We joined NATO, the European Union, and the Euro Zone so that people would remember that Estonia exists and is now independent.”

It is a worthy hope.

All text and photos Copyright 2013, Corey Sandler. If you would like a copy of a photo, please contact me through the tab on this blog.