The Tides They Are a’Changing

We think of New Brunswick as part of English Canada, but it actually has a significant French background.

Jacques Cartier claimed the region for France in 1534. Giovanni da Verrazzano, an Italian sailing for the French in 1548, though the place worthy of being named after Arcadia, the Greek name for an idyllic place. In French, that became Acadie.

Right from the start, this was the line of dispute between the French and the English.

In 1629, the English brought in boatloads of Scottish settlers and changed the settlement’s name to “Nova Scotia,” Latin for New Scotland.

The colony was returned to France in 1632, but disputes between the two powers continued until 1713 and the Treaty of Utrecht when Acadia passed a final time into British hands.

Although the question of sovereignty was settled, skirmishes continued.

That led to Le Grand Dérangement, the Great Upheaval: the displacement by the British of the French Acadians.

It is estimated that three-quarters of the Acadian population was uprooted between 1755 and 1762.

The Acadians landed in many places, but the best known colony of expatriates went to Louisiana. And there they became known as the Cajuns. 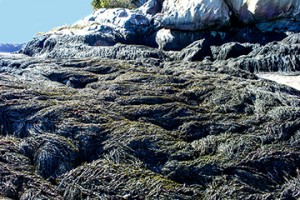 Rocks and seaweed along the beach in one of the places with the greatest tidal range in the world. Photo by Corey Sandler

Walter Pidgeon starred in many popular films including “How Green Was My Valley”, “Mrs. Miniver”, and “Advise and Consent.”

And more recently, Donald Sutherland, who came to fame as Hawkeye Pierce in the movie “MASH”, as well as “Klute”, “Invasion of the Body Snatchers,” and “Ordinary People.”

He is also the father of Keifer Sutherland, who for eight seasons single-handedly protected the United States from nuclear, biological, and narcoterrorists as Jack Bauer in the series, “24.”

Also from Saint John: Stompin’ Tom Connors, one of the most successful country singers to come out of Canada.

Fundy and the Falls

But the thing which makes Saint John and the surrounding region most famous around the world is an unusual natural phenomenon.

The tourism board will tell you that Minas Basin in the Bay of Fundy has the highest tides in the world.

In truth, it depends on who is doing the measuring and when the measurements are done.

I have been to places much further north, including Leaf Basin in Canada’s Ungava Bay at the top of Quebec near Hudson Strait. Some scientists say the tidal range in Ungava is greater.

Of course, not all that many tourists—or even scientists—go to Ungava Bay.

I do know that when I went there researching my book on Henry Hudson, our icebreaker had to wait twelve hours for the highest of tides in order to get out of the bay. And we still scraped bottom.

And there are also those who say the Severn Estuary in the U.K. should be in the discussion.

So in fairness and accuracy, I think we can say that the Bay of Fundy has one of the highest tidal ranges in the world.

In classic political fashion, the Canadian Hydrographic Service has declared it a statistical tie, with measurements of a 16.8 meter (55.1 feet) tidal range in Ungava Bay and 17 meters (55.8 feet) at Burntcoat Head for the Bay of Fundy.

At Saint John itself, the St. John River flows into the Bay of Fundy through a narrow gorge several hundred feet wide at the center of the city.

The tidal difference in Saint John is about 8 meters or 28 feet.

And it is there that we have the unusual phenomenon called the Reversing Falls.

It’s not what it sounds like: it is not a waterfall that flows upstream.

What happens is that when the tide changes—as it approaches and then reaches high tide—it flows over the top of the river.

When it is coming into the Saint John River, it appears to reverse the water flow of the river for several kilometers.

The phenomenon continues for several hours.

The rapids, or “falls,” are created by a series of underwater ledges which roil the water in either direction, causing a significant navigation hazard, despite the depth of water. 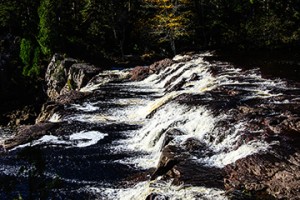 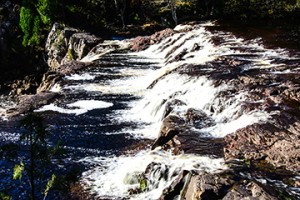 Tides and falls in the Bay of Fundy. Photos by Corey Sandler

Now, the Reversing Falls is not quite Niagara or Yellowstone National Park. It’s interesting, no doubt.

But many visitors are surprised to find the encroachments of industry on this natural wonder.

The Canadian Pacific Railway built the first Reversing Falls Railway Bridge in 1885; the current one at the location took its place in 1922 and is used by the New Brunswick Southern Railway.There’s also a road bridge. Both are just downstream.

And then there is the not-very-attractive pulp mill right at the falls, directly across from Fallsview Park.The J.D. Irving mill has been in operation for many decades and continues to belch steam and raise the hackles of environmentalists. 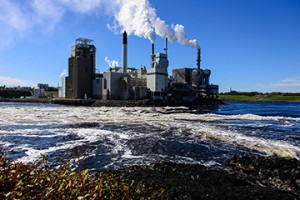 The Reversing Falls and the paper mill. Photo by Corey Sandler

Fallsview Park offers a good vantage point of the falls.

But the real lure for many people is a jet boat ride. This is not for the timid, or for those who don’t want to get wet.

In fact the whole point seems to be to get wet.

I’ve ridden the jet, and I’ll tell you: some might find it more fun to watch than to ride.

They loaned us a rainsuit, which wasn’t a whole lot of help.

I had to take off my glasses so that they wouldn’t fly away.

And I couldn’t take any pictures, because I wasn’t about to risk my professional equipment in the boat.

This time, I photographed the jet boats from the shore. 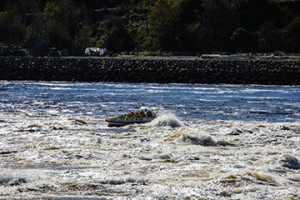 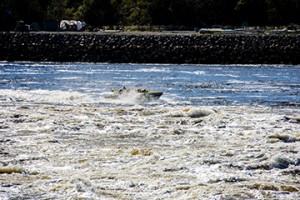 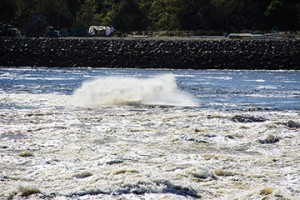 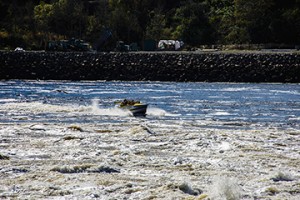 A Jet Boat in the Reversing Falls. People pay for this. Photos by Corey Sandler