In the dark that precedes dawn’s first light, a distant glow merely hints at the great harbor and city that lays ahead of us.

We picked up a bar pilot at 5:30 in the morning off the coast of Long Island and headed west toward the mouth of the Hudson River. 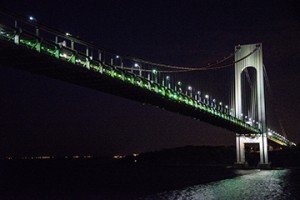 Beneath the Verrazzano Narrows Bridge at dawn. Photo by Corey Sandler

Okay, about the job title: a bar pilot is not in charge of delivering the crew to a tavern. The bar pilot is aboard to guide the captain and helmsman across the bar at the mouth of the channel from the sea and through the harbor.

In constant communication with harbor authorities and other vessels, in New York he or she is aboard for about two hours.

Most pilot boats carry a bit of extra hardware in addition to navigation lights: a white round light atop a red one. (Fishing boats carry a red over white.) The old maritime saying is: “white cap, red nose” for pilot boats…with an intimation that in past times pilots might down a bit of booze while waiting for ships to come in. If that was ever true, I seriously doubt the master of a modern ship worth several hundred million dollars would accept a pilot with a wobble.[whohit]-New York 29Oct-[/whohit]

About 6 in the morning we could make out the old boardwalk and some of the landmarks of Coney Island: the parachute jump and the Wonder Wheel. And then we could see the lights of the Verrazzano Narrows Bridge, the unofficial demarcation of the Hudson River at New York.

Guests began to gather in the Observation Lounge up top and forward on Silver Whisper and on the outside decks. We passed beneath the bridge just after 6:30 a.m., and then ahead of us lay Lower Manhattan: the Hudson River branching off to the left and the East River to the right. 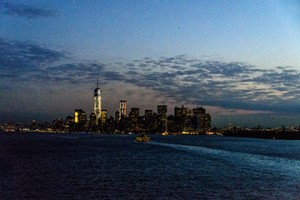 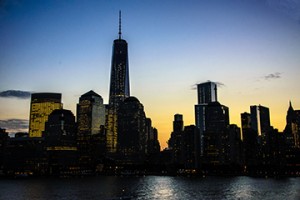 Lower Manhattan. The Hudson River continues to the left, the East River branches off to the right. Photos by Corey Sandler

Staten Island ferries steamed across the harbor, and faster commuter ferries darted back and forth.

As dawn arrived, we passed abeam of Lady Liberty on our port side. I gave the order from the bridge by telephone down to our ship’s broadcast center: “Now. Loud. Everywhere.” And Frank Sinatra’s “New York, New York” boomed throughout Silver Whisper.

It was not just the passengers lining the decks. From nearly every opening on the ship, crew leaned out for a glimpse and a photo to send back home. 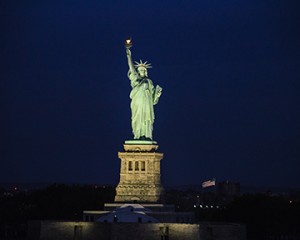 The Statue of Liberty at dawn’s early light. Photo by Corey Sandler

We proceeded up the Hudson, alongside the former World Trade Center site. The superstructure of its replacement tower is complete while interior work continues.

About 8 a.m., a tug boat pulled alongside with a second pilot for a short but essential–and daunting–assignment of providing guidance on making a 90-degree turn from the river into the dock along Manhattan’s West Side. Like an airline pilot, the docking pilot is on the spot for a few minutes of high tension at landing. 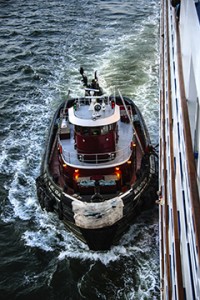 The docking pilot comes aboard. Photo by Corey Sandler

Most of our guests and more than a few crew members were ready to debark. For Janice and me, it’s been a two-month odyssey that began in the Baltic and included stops in Sweden, Russia, Finland, Denmark, Germany, England, Ireland, Iceland, Greenland, and Canada. All told, we’ve been out to sea on four different beautiful Silversea cruise ships for a total of seven months in 2013.

It’s time to head for home. See you in 2014…somewhere. Safe travels.